...Hate Me Because I Have Steak.

Once I began cooking regularly I understood more the term "Culinary Arts".  By no means do I place myself in that category, but seeing the art in cooking not only enhanced my enjoyment of it but also inspired me to experiment.  Just as I play with color and texture in clothing, light and composition in photography, I can play with flavor and balance in food.

To survive we must eat, to survive in good spirits we should eat well.  Food deprivation is torturous, over-indulgence is unhealthy.  The key is moderation.  Eat anything you want, but not everything you want (more or less).

Today I wanted steak.  Not just any steak, Daniel's Broiler steak.  Instead of flying to Seattle to fulfill the craving I did my best at home.  Of the three grocery store options here one happens to sell pretty good beef tenderloin and a selection of fresh produce impressive for this area.  I selected some fresh, brown button mushrooms because they complement beef so well and a bag of frozen, shelled edamame because digestively they balance the steak.


For the most part, I believe simple ingredients and simple steps create wholesome, tasty meals.  There are always exceptions, this is not one.  I seasoned the filet with fresh ground sea salt and black pepper and quickly pan-seered the outside in melted butter.  Real butter.  Then I threw it on a pre-heated broiler pan in my beloved toaster oven and broiled it on one side for a few minutes, flipped it and did the other side for just a couple minutes.  It ended up on the medium side of medium-rare because I was cooking the mushrooms a little different than usual and my timing was off, but it's a thick cut and didn't suffer much.

Adding to the browned butter I threw in a clove of roughly chopped garlic, some splashes of Worcestershire sauce and a sprinkling of celery seed.  Why celery seed?  Why not?  I had it, it smelled fresh and mild so as not to overpower other flavors and I thought it would work well with the salt.  They make celery salt so they must compliment, right?  See, that is where creativity come in to play.  While sauteing the mushrooms I microwaved the bag of edamame for less time than recommended because I like it closer to raw then fully cooked.  Once done I put a handful in the pan to mix with the sauce for a minute.  That's it. 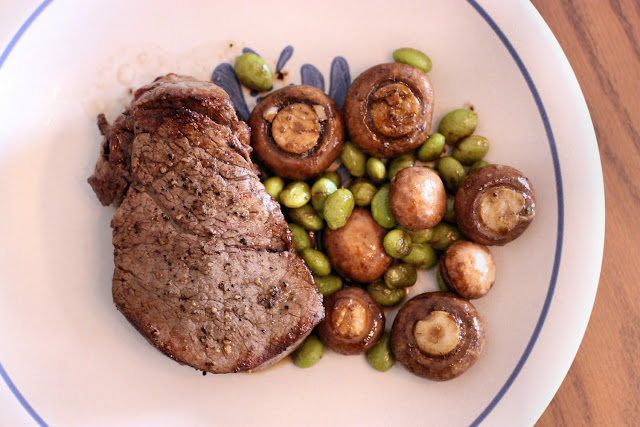 I paired it with a run of the mill California Cabernet Sauvignon to balance out the cost of the meat, so it worked with the meal but was not a stand out.  In the warm days of Texas we chill our reds because by the time we carry the glass to the table it's at cellar temp.  Just a nugget of local info.