"Office" implies work, where a clock is generally necessary.  "Studio" suggests a creative space where time may be measured by stages of a project as opposed to numbers on the wall.  So my dilemma is to clock or not to clock in my office-studio.  (I'm still having a terminology debate; When I refer to it as "my room" I shiver with flashbacks from adolescence and college roommates.)

Circumstances and choices currently allow me the luxury of free time.  Bearing equal weight are the difficulties and sacrifices that come with it.  Depending on my mood I waver between complaining and appreciating the affects of working part-time and living a less than socially active lifestyle.

On a peaceful, cloudy Sunday like today we are drinking coffee and each relaxing in our own way.  I slept in until 7:30 this morning and proceeded to prepare Barbacoa in the slow-cooker.  Since then I've been relishing the smell of cilantro, lime, onion, chipotle and beef while sipping through a pot of coffee at my computer, gazing out the window as much as looking at the screen.  He slept in later (missing the fresh coffee) and is internally processing his projects-in-progress with the company of Top Gear.  Watching the clock is not a priority except in anticipation of dinner and in planning the pico de gallo preparation.

Back to the time discussion though.  Why write about it today?  (Other than the obvious fact that I have it.)  My brother shared Tim Kreider's New York Times piece this morning about time and one thought I pulled from it is this,

"The space and quiet that idleness provides is a necessary condition for standing back from life and seeing it whole, for making unexpected connections and waiting for the wild summer lightning strikes of inspiration — it is, paradoxically, necessary to getting any work done."

This idea should be posted in every work space as a reminder to periodically slow down and step back.  My office-studio is the "space and quiet" that I have wanted for so long.  I feel as if I am "standing back from life" whether I choose to shut the door in complete silence or leave it open, allowing the white noise of the computer to dissolve into the television from the living room.

As for the clock question, I have temporarily placed a small analog clock near my doorway because I have been "tricked" when looking into the hall only to see the reflection of the kitchen clock in the mirror.  It is not twenty minutes after four, as the first glance assumes, but rather twenty minutes to eight.  Oops. 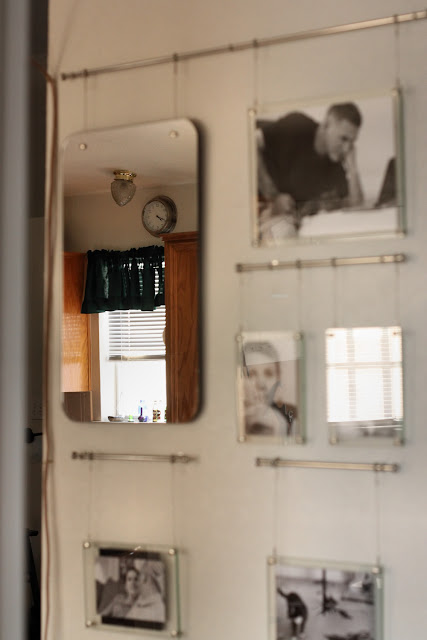