On December 13th "lights" refers to Christmas lights, even if I struggle to think otherwise.

As family grows further and time in retail grows longer my Christmas spirit fades.  The little tree-in-a-box that lives in storage came out of hiding this year only because it may be in long term storage next Christmas and it desperately needed pruning.

Bought on clearance post-holiday 2006, it was a small, manageable, pre-lit tree at a bargain price and since we didn't have one I thought it appropriate.  Each year it seemed that more lights stopped working until a few years ago only about 25% still lit up.  Then due to pure Scrooge-ness I stopped using it.

Earlier this week I frothed up a spiced eggnog and rum (or two.  or three.)  and meticulously untwined, untwisted and snipped out the entire lighting system on the tree.  An hour (and one Top Gear) later it was beautiful in it's nakedness.  Of course I immediately began to restring new lights on it only to discover the strand of warm white LED lights only covered the top half.  So I have a bottomless-lit tree and carry no guilt about leaving it that way.

This evening, while relishing a perfectly medium-rare-done steak and an accompanying Cabernet Sauvignon, I looked up and saw lights.  First before me was the Christmas tree in it's simplistic state and beyond was the new lamp that I love but carries a disappointing back story.  Next to the tree is a torchiere lamp common to my dwellings.  To quote someone dear and very near, "Torchiere: French for piece of shit lamp."  I never denied it. 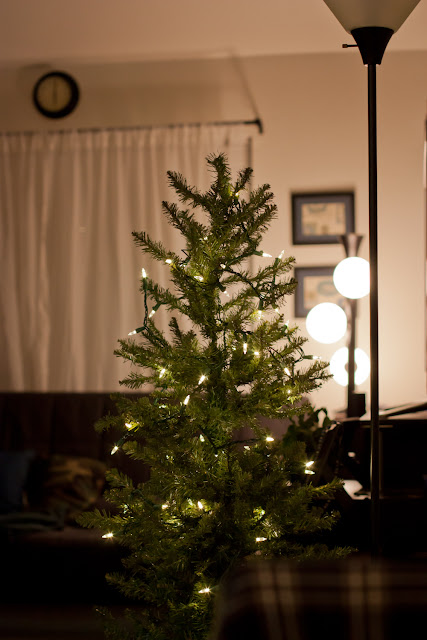 Email ThisBlogThis!Share to TwitterShare to FacebookShare to Pinterest
Labels: photo a day