Messy Bucket of Food for Thought.

My Grandma always says that your mind is like a bucket – it only holds so much.  So when you pour in new information something's going to spill out the other side.

About four months ago we began sorting and packing for our overseas move.  These preparations changed our daily routine which, of course, changed the way we ate.  Now life has settled a bit, we are living in our new house, albeit with precious few of our belongings, and I'm waiting for things to get back to normal.  Ha-ha, the joke is on me.  Our new normal has yet to resemble any normal we've experienced before and I'm doubting whether it ever will.

Instead of delving into the mass confusion swarming my mind currently, at this time I will only speak about daily meals.  Breakfast doesn't count because we still eat cold cereal.  Lunch doesn't count either (even though I just read a great article in the Times this morning about it) because I'm not working and, as I've mentioned before, I'll write about that when I'm ready.  That leaves dinner.

I don't remember specifically what I used to make for dinner before we moved here,  hence the bucket reference.  I have a thousand recipes bookmarked on this computer yet when it comes to figuring out what to make for dinner I'm stumped.

Our current meal foundation is generally protein, vegetable and starch (if it's just me I usually forgo the starch, the husband needs it for PT energy though).  Between the commissary and local grocers most meats and vegetables are available here, however the selection is much more dependent on growing season and the prices are significantly higher.  Meat and fish are packaged in much smaller portions than in the US which is convenient when buying for only two people but the cost is nearly double.

I'm still learning how to use the same food budget in a completely different economy.  The dollar/yen exchange rate is fairly easy to understand but when I'm trying to compare dollar-per-pound to yen-per-gram the math gets confusing.  Produce here is often priced per piece rather than per pound/gram, but since the pricing signs are in kanji it's difficult to figure out.  I once saw potatoes for 28.  I thought it was by weight but it was actually per piece, so those delicious mashed potatoes were quite pricey (by US standards) as it turns out.

Meal planning is non-existent at this point.  I don't know what I can get, where I can get it, or what it will cost.  I can dig into my thousand recipes but finding the ingredients is a crap shoot.  So lately I've been working off-the-cuff; I find a few flavors to play with, search for some recipes, head to the store, and buy what fits the profile that will fit into my backpack.

Today I was thinking about cherry-balsamic glazed pork chops, an idea originating from the package of three boneless chops I bought on Sunday at the commissary.  Unfortunately, the two local grocery stores I went to did not have cherries, a circumstance I foresaw.  Instead I bought a small package of cherry tomatoes and some eggplant.  How the dinner turned out though is inconsequential to the idea I am attempting to describe, but I can say it was pretty good.

While cooking I was trying to remember the order I have followed in the past when making a reduction sauce; it's not brain surgery but there are certainly techniques that yield better results.  Then it hit me – it's all about technique.

I'm a visual person, so bear with me.  Imagine a giant wrecking ball smashing into a huge building with bricks flying everywhere and mortar remnants and rubble tumbling in all direction.  Well, that's kind of what's happening in my mind right now.  When I sort it all through and make sense of it I'll write it all out.

On a side note, I have a huge knot in my shoulder that has bothered me for many long months and it's really aggravating me today, not helping my focus either.

My receipt from today and what I think I remember everything is: 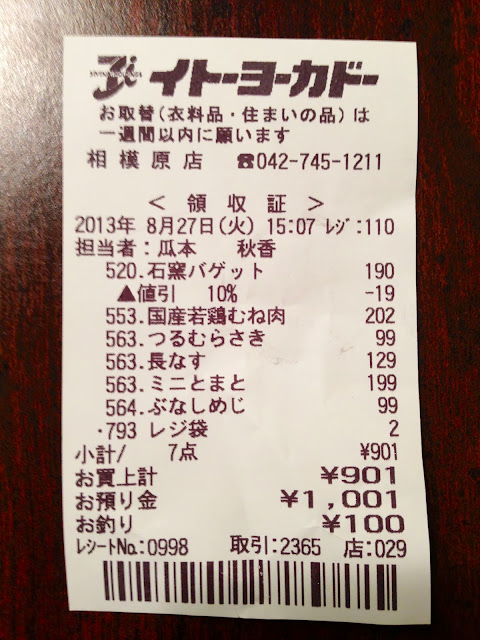 The produce is by memory so some of it is likely incorrect.  I promise I will take photos of everything I buy during one of these grocery trips.  Anyway, it cost me approximately $9.21 cents for a bit of produce, two chicken breasts and half a baguette.  Maybe I'm a cheap-o but that seems like a lot to me, especially given the package sizes.