Immediately following my last blog post I got to straight to work.  I cleared out the area adjacent to my side of the bed and spent a couple hours cleaning and arranging the various shelving components.  It was more difficult than usual due to space constraints and I realize it may need adjustment as the unpacking continues.  I actually factored earthquake safety into the process and made sure the shelves were stacked firmly together at a moderate height.   Because of this there were a few shelves I didn't use in the setup and haven’t decided yet whether I’ll use them in the bedroom for clothes, in my office downstairs in the dining room, or share them with my husband for use in his office.  I guess it depends on how the unpacking organization unfolds. 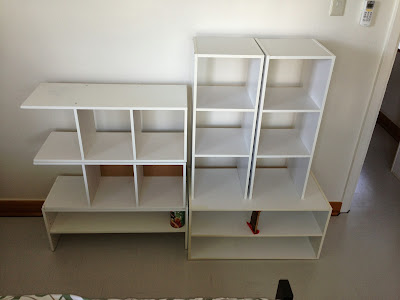 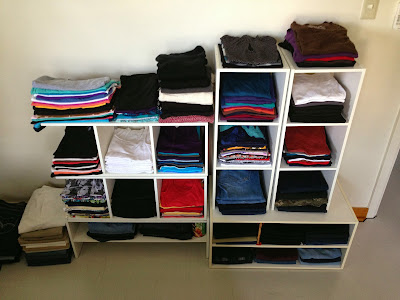 The stacks of clothing in the after photo are separated between sleeveless, short sleeve, and long sleeve tops with each category further divided by either solid/printed or warm/cool/neutral colors.  There are separate stacks for built-in bra camis, knit sweaters, and jersey knit turtlenecks.  The bottoms are separated by shorts, capris, and long pants with each category further divided by either leg width (ex: bootcut, skinny), fabric weight, or frequency worn.  This is by no means the extent of my wardrobe; the whole shebang is worth its own post.

While cleaning and reorganizing my old dresser I found one drawer’s slide guide had broken off underneath.  This came as no surprise; the dresser is old and has certainly seen better days.  I think I once wrote about refinishing or updating it, along with the matching desk (that I didn't bring to Japan with me).  All I ever did was replace the knobs and, as you can see from the photo, they didn't fare so well during the move.  I often just want to dissemble the thing for firewood but, for the first time, we don’t even have a fireplace to burn it in.  I guess I’ll make it work somehow.  I asked my husband to fix the slide only because I didn't feel like messing with it. 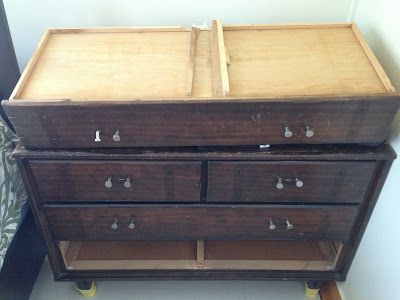 The next phase of my clothing organization is my shoes, my hanging clothes, and my closet.  This will get done within the week.  It must, I can’t put it off any longer.  I’ll be sure to take some before and after photos because it is a very challenging project.

Within two days of our household goods arriving I had every kitchen box unpacked.  Since we had already been living in the house for over a month I kind of already knew how the kitchen organization would work.  Kind of.  It’s impossible to know precisely how to organize a space until you are living in it, day-to-day, with all your tools and belongings.  So, this weekend, I reorganized a few areas to better suit how I am using it.

This organize-as-you-go method is new to me.  As a perfectionist I like to do things correctly the first time so as not to waste time re-doing it later.  Sometimes this process, however, would freeze me in my tracks if I didn’t know exactly how to proceed.  This time I forced myself to loosen up and realize that it is okay to put things away in a temporary home until a better place was found.  So far, this method is working because I am actually following through on the “better place” part.  For most people this is nothing significant, but it is a true testament to the efficacy of combination drug and talk therapy for those living with any anxiety/depressive disorder.  Small victories, I say.

I re-worked the pantry almost to the point of completion; there are a few minor changes I’d like to do but that will always be the case.  The other most difficult areas are the upper, corner cabinets and the lower, corner, lazy-susan cabinets.  I hate them both.  The lazy-susan cabinets have plastic shelves that cannot bear too much weight and the doors have hinges that are time bombs waiting to break.  I hate them enough that I won’t even continue writing about them now.  I have some before and almost-after photos but I’ll share them later when the almost-after becomes a more actual-after.