Success two nights in a row.  I’m just going to brag, so close the tab if you don’t want to hear it.


Two packages of seafood and some mushrooms from yesterday’s shopping trip remained in the fridge ready to be delicious.  Since a Spanish Chardonnay was there keeping them company I decided to keep them together because they complement each other splendidly.  Therefore I Googled “shrimp mushrooms butter” and dug into the results, selecting three recipes to work from, saving them in Evernote.


What is Evernote?  It’s an amazing tool.  Briefly I will explain the two reasons I use it, though its applications are much more vast.  First, I began using it to catalog the hopelessly large number of internet bookmarks I have on my computers.  Since it is an outside application that stores my information in a cloud I can access everything from any device that connects to the internet.  My second reason resulted from the first, actually.  I use my laptop for general research purposes and save webpages in Evernote, which I can then access through my cell phone.  This is incredibly convenient when I am at the grocery store looking for a recipe’s ingredients as well as in the kitchen while I’m cooking.  To conserve memory space I frequently save websites in “clearly” (condensed) format which only displays the minimal, pertinent information.  I mention this tonight because it affected how I cooked dinner.

Since Enterprise: The Best Kitty Ever had a routine vet appointment this afternoon, I drove my husband to work so I could use the car.  This meant that I had to pick him up from work in the evening and wouldn't get home to cook dinner until 6pm or later.  The sun now sets here around 5:15pm so 6pm feels very late and dinner preparation is rushed a bit.  I knew what I was making, had the ingredients on hand, and planned about a half hour to prepare it.  Once we got home I jumped right into it, heating up the pan and pealing the shrimp.  When I had the shrimp sautéing in butter I opened the recipe on Evernote and realized the “clearly” version only listed the steps and not the ingredient list.  No problem.

“Shrimp and Mushroom Linguine with Creamy Cheese Herb Sauce” is the recipe I worked from.  If you click the link and look at the directions you’ll see exactly what I had to work with.  Obviously I improvised and I’ll attempt to briefly explain my differences.


I sautéed the cod fillet and the pealed, raw shrimp in butter with a sprinkling of salt and pepper.  Once done, I removed them from the pan into a covered glass dish, added more butter, and sautéed the maitake mushrooms.  They were quickly done and I added them to the same dish, covered to keep warm.  With more butter (yes!) I threw in three large garlic cloves, coarsely minced, along with the cream cheese.  I stirred it with confusion as it didn't mix very creamy as I assumed it would, but I added a healthy amount of fresh basil (that was in my fridge, a moment away from going bad) and continued stirring.


At this point, I had just added linguine noodles to boiling water and scooped out some of the starchy water to mix with the cream sauce.  Without the ingredient list I had no idea how much to add so I went incrementally, whisking it together.  Once it looked like an appropriate amount of sauce I stopped adding water and stirred in a little corn starch slurry to thicken it up, then I stirred in the cooked seafood and mushrooms.

That’s it.  I drained the linguine noodles for my husband and I scooped mine over fresh baby spinach, with a small amount of noodles to see how they blended with the sauce.  The shrimp were incredibly, meaty and tender at the same time, convincing me that fresh, raw shrimp is the way to go.  I also loved the cod’s texture; I have made it before with similar results and will definitely seek it out regularly, trying new cooking methods.

The Spanish Chardonnay was lighter than the small selection of California Chardonnays I've grown accustomed to since moving here and worked very well with the light cream sauce and simply prepared seafood.  I especially liked it with the spinach because the wine’s lightness resembled that of a Sauvignon Blanc which generally pair well with greens. 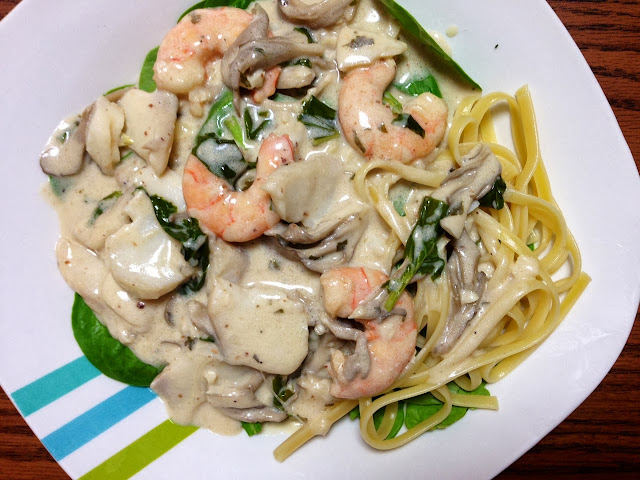