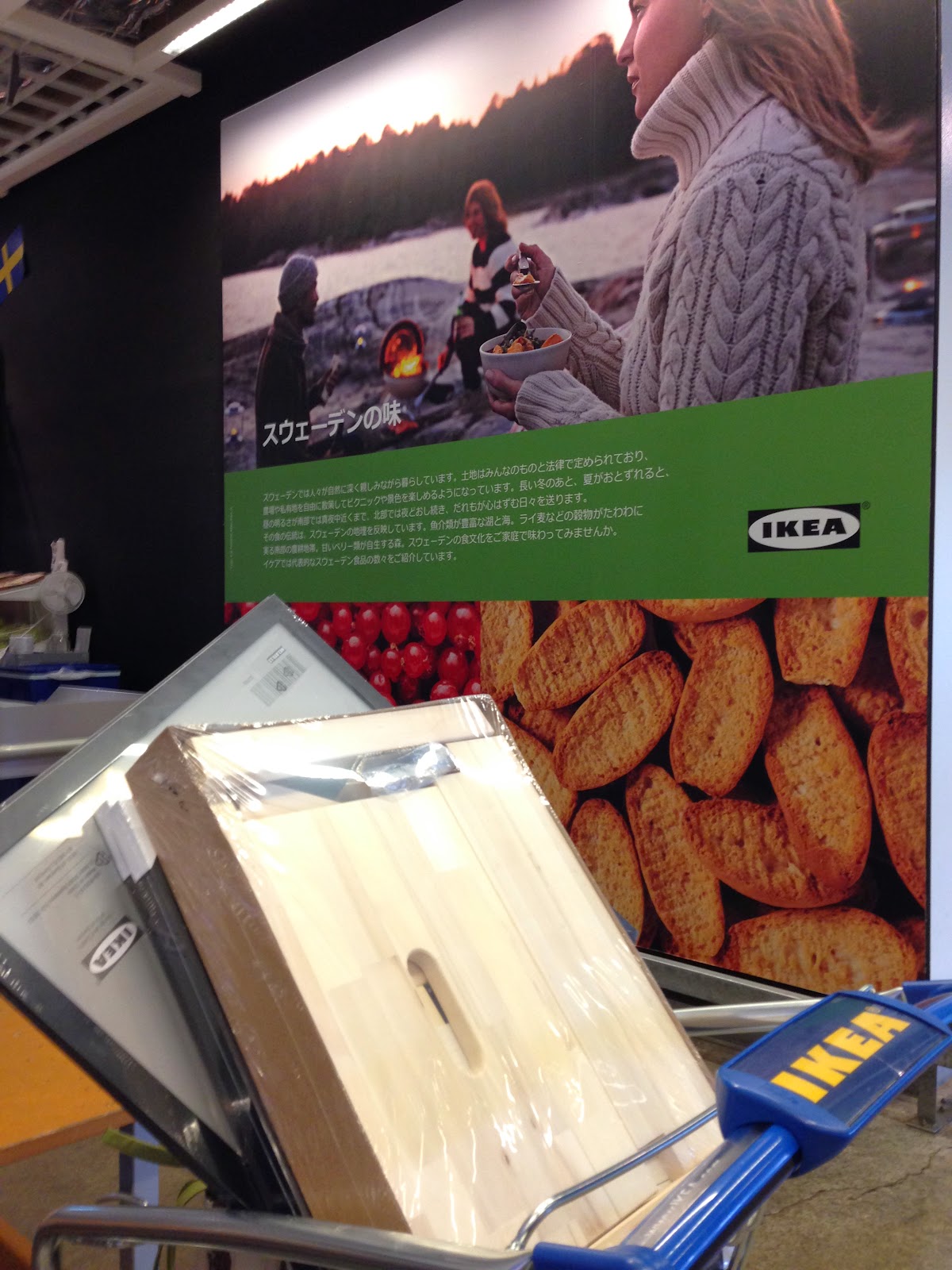 Even though our closest Ikea is only about 14 miles away it takes an hour to drive there if traffic is moving well.  Our first visit was on a Friday afternoon late last summer shortly after we moved here and it was packed.  When I decided return this past Wednesday I chose to go by myself and arrived just after their 10 am opening, carefully backing in to my parking space.

Previously we had parked front end first as we are used to in the US.  We were the only vehicle there parked like that.  Most drivers in Japan seem to back-in park.  I assume it is due to the population density and the number of people always walking and riding bikes.  It is safer to back in to a parking space where people are unlikely to be than to back out of that space where people are guaranteed to be.  Then when you leave, facing outward, you can easily see anyone moving.  I am grateful for our small car because backing in a right-side drive vehicle takes some a lot of practice after operating as a left-side driver for twenty years.

The number of shoppers this time seemed similar to what I am familiar with in the States so I was able to take my time following the path around the store.  I worked comfortably off my prepared list and found most of what I was looking for. 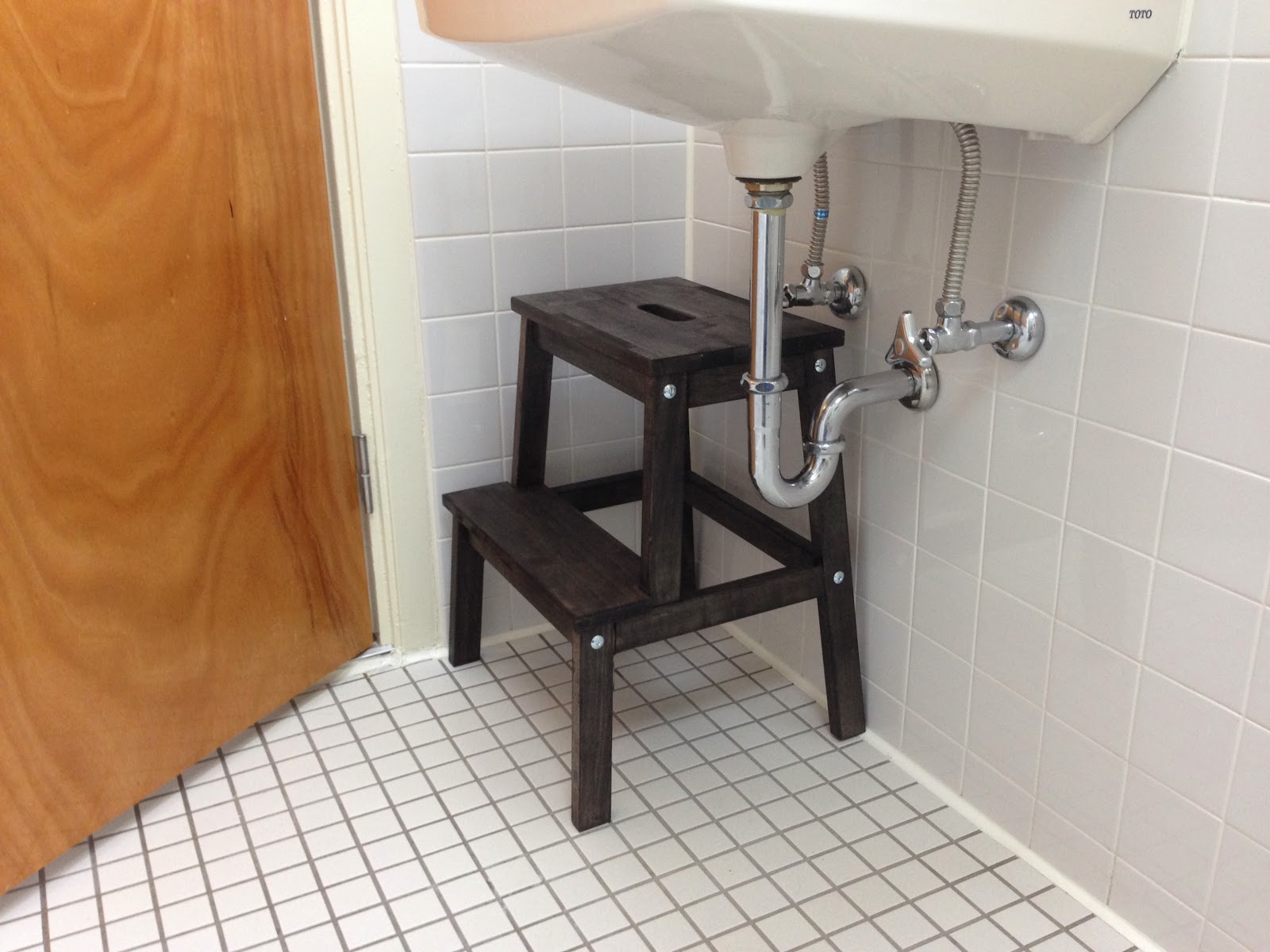 Top priority on my list was the Bekvam step stool for our bathroom; I looked for it on our previous trip but it was sold out.  Various hygiene tasks are simpler to perform while sitting, such as clipping your nails.  The toilet lid is generally the default location to sit in a bathroom.  The plastic lid on our industrial/commercial commode, however, is too flexible and bends inward with any weight.  This leaves the bathtub edge to sit on which is not comfortable in the least.

Hence, the step stool.  Not only is it versatile enough for use an almost any room, at ¥1533 (~$15) it was one of the most inexpensive options. 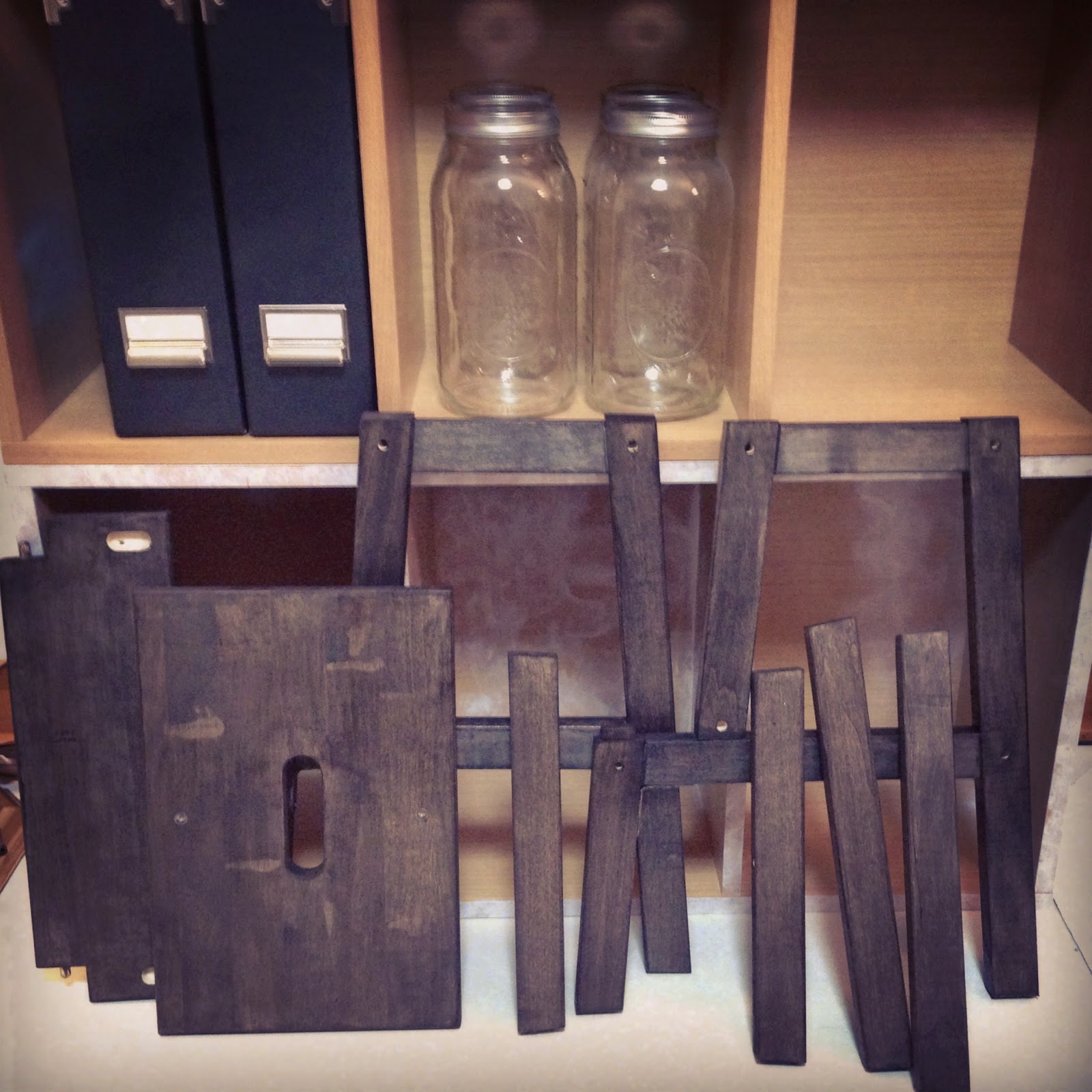 I chose the natural wood and stained the pieces outside a couple days ago with two coats of the Behandla glazing paint.  I put it together yesterday and am impressed with its solidity, not a creak or wobble at all, and it fits perfectly under the sink.

The shelves pictured here on the left are a future project.  I picked up the set for $5 but one of them must be cured of it's unfortunate white sponge paint.  I am considering whether to paint both or just the one, and what type of paint to use over the laminate surface.

The black Kassett magazine files are new also.  I have other pieces in the series and these were on my list. 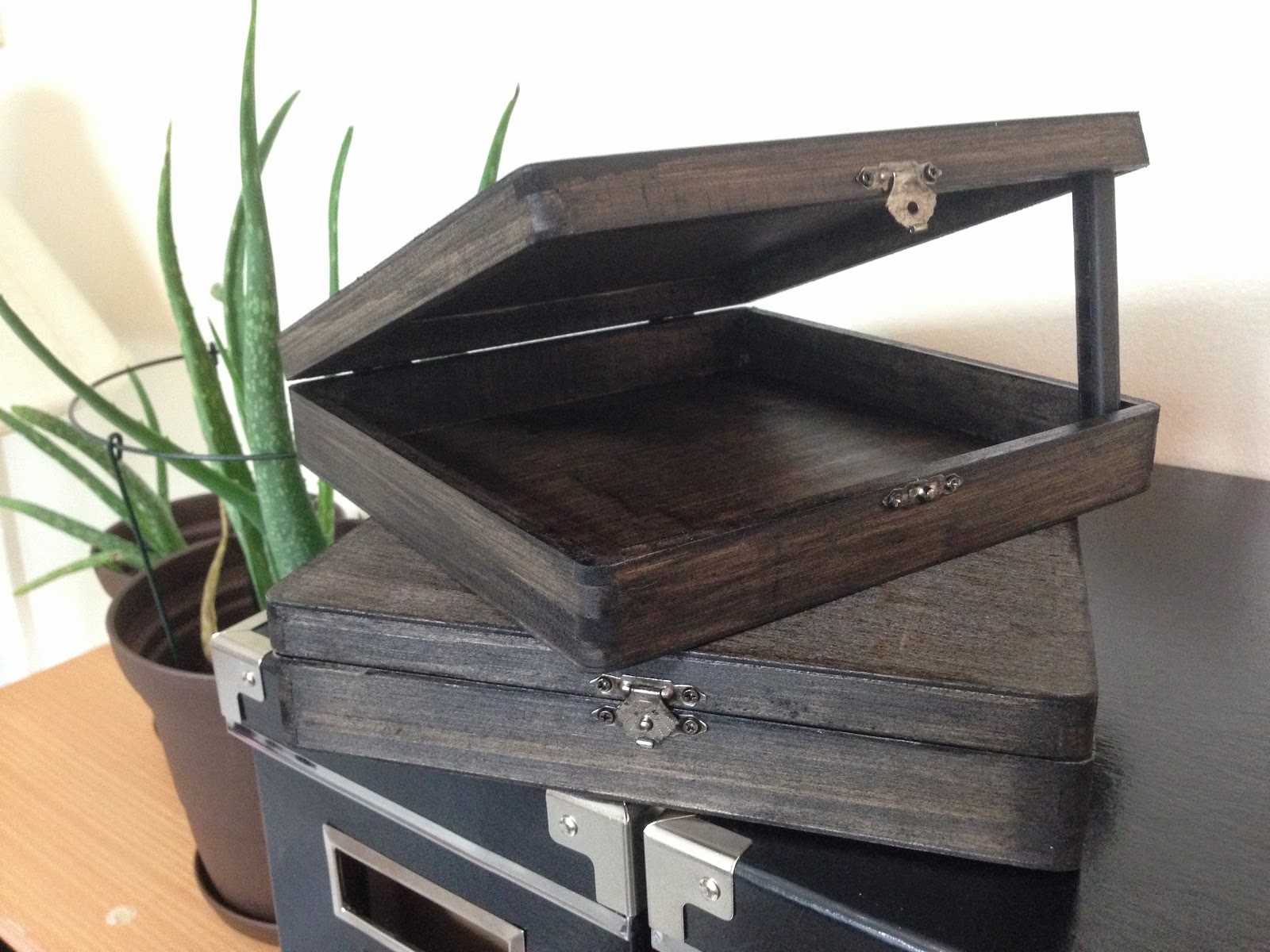 Using the same Ikea glaze I stained these two small unfinished cigar boxes I picked up at our local thrift store for 75¢ each.  They had some cutesy decoration things glued on the tops that I gently, but easily, pried off.  Then I sanded off the glue residue.

You can also see here some of the Kassett series boxes bought previously that are no longer available.  I use them for storing medium sized photo prints and albums. 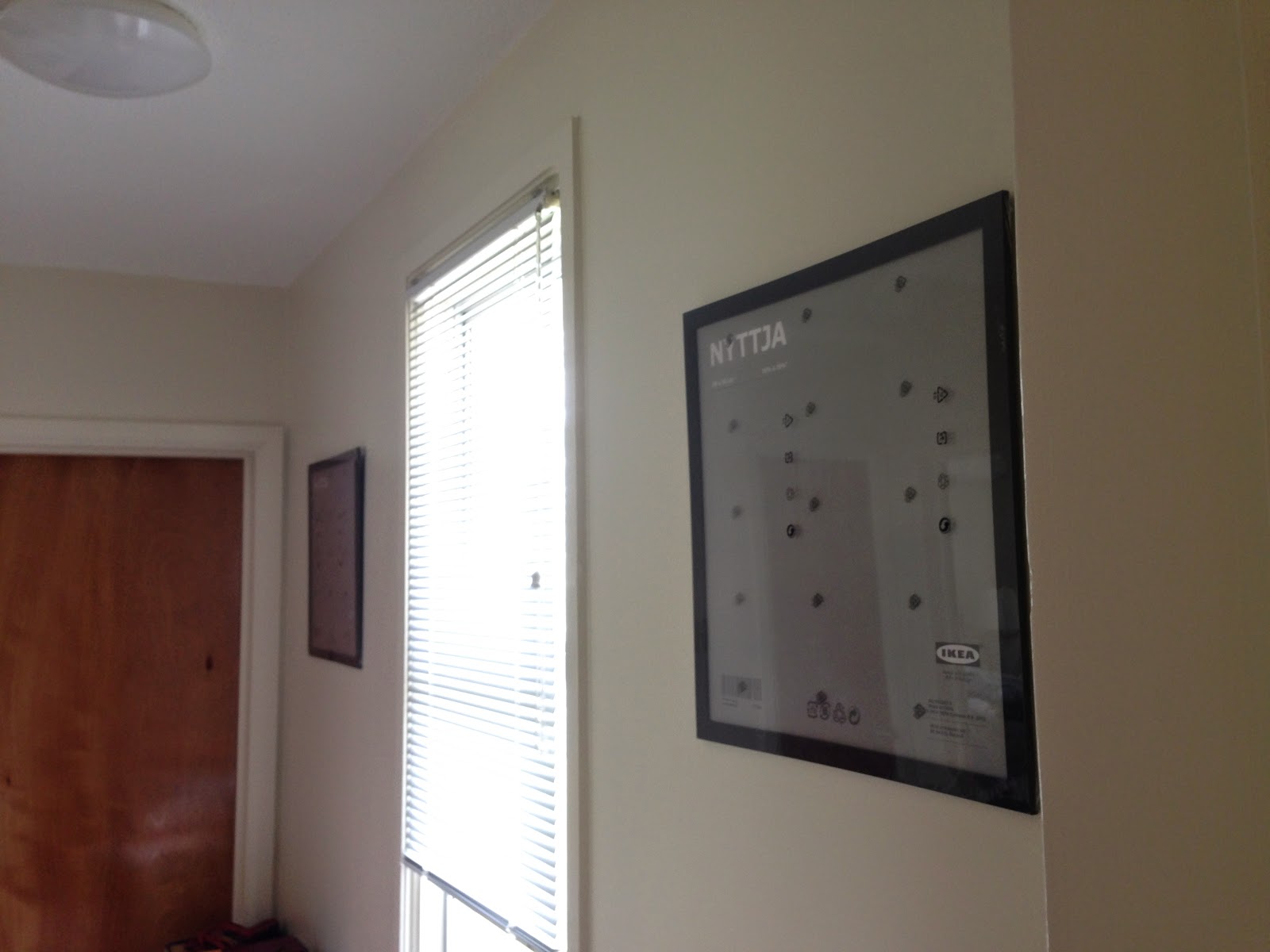 The remaining Ikea items I bought are photo frames.  I carefully measured the sizes I needed and researched the metric equivalent to find the appropriate sizes for my needs.

We have a window at the top of our stairs with blank walls on either side demanding art.  Because the light is usually dim in this hallway I wanted some large but simple photographs to hang there.  I waited (and waited) until Mpix ran a sale and ordered 20 inch square prints of two macro photos I took this past spring.  The Nyttja frames are 50 cm square, about half an inch off, but since they are upstairs I can alter the framing just a bit and it won't be as noticeable.  We shall see how it works out when the prints arrive.

The Ten on Ten Project was first introduced to me through the blog of an awesome person whose life intersected with mine at a pivotal point, Bleu Dress Jes.  The concept originally began with Rebekah Gough at her blog, a bit of sunshine.  She explains it as, "a fun and interactive way for blogger's from all around the globe to document a snap shot of their lives too, once a month on the tenth taking a photo an hour for ten consecutive hours. Finding life and beauty in the ordinary things of our day to day!"

My first month of participation was this past April.  I used Instagram, shared on Facebook, to track my day.  It was a bit much, I admit, and very time consuming to photograph, notate, and post hourly photos in real time.  I approached this 10th of May differently.

First, I completely forgot about the Ten on Ten until I checked the time on my phone when arriving at the train station; it was 8:00 am precisely and the Date read, May 10.  I immediately took two photos.  I was heading out of the train station to meet up with a group of other photo club members who were going up to Tokyo for the day to get their camera sensors cleaned and to photograph the city, of course.  Since my sensor was cleaned recently I went for the experience, I love photowalk meetups.

Remembering to take hourly snapshots throughout the day while also out with a group and taking "real" photographs was challenging.  All of the Ten on Ten shots were taken within about a ten minute time frame around the top of the hour.  Since we were on the move the whole day I didn't take the time to set up or compose an artful shot, instead I snapped a few quick photos and later combined them in little collages made through Moldiv, a collage photo app available through iTunes and Google Play for Android.

Instead of blowing up my Instagram and Facebook feeds I am sharing my May Ten on Ten here, and in the future if I remember.


All photos taken with iPhone 5.

The most recent assignment from the Photography Club I belong to was a scavenger hunt.  I decided to go out during a quiet, Sunday late afternoon and complete the search from start to finish, and accept the challenge to "use the first photo you take of each item."  With my trusty 50mm f/1.4 I returned in a little over an hour with twelve consecutive photos.

Disclaimer: Some artistic license was used for some subjects. 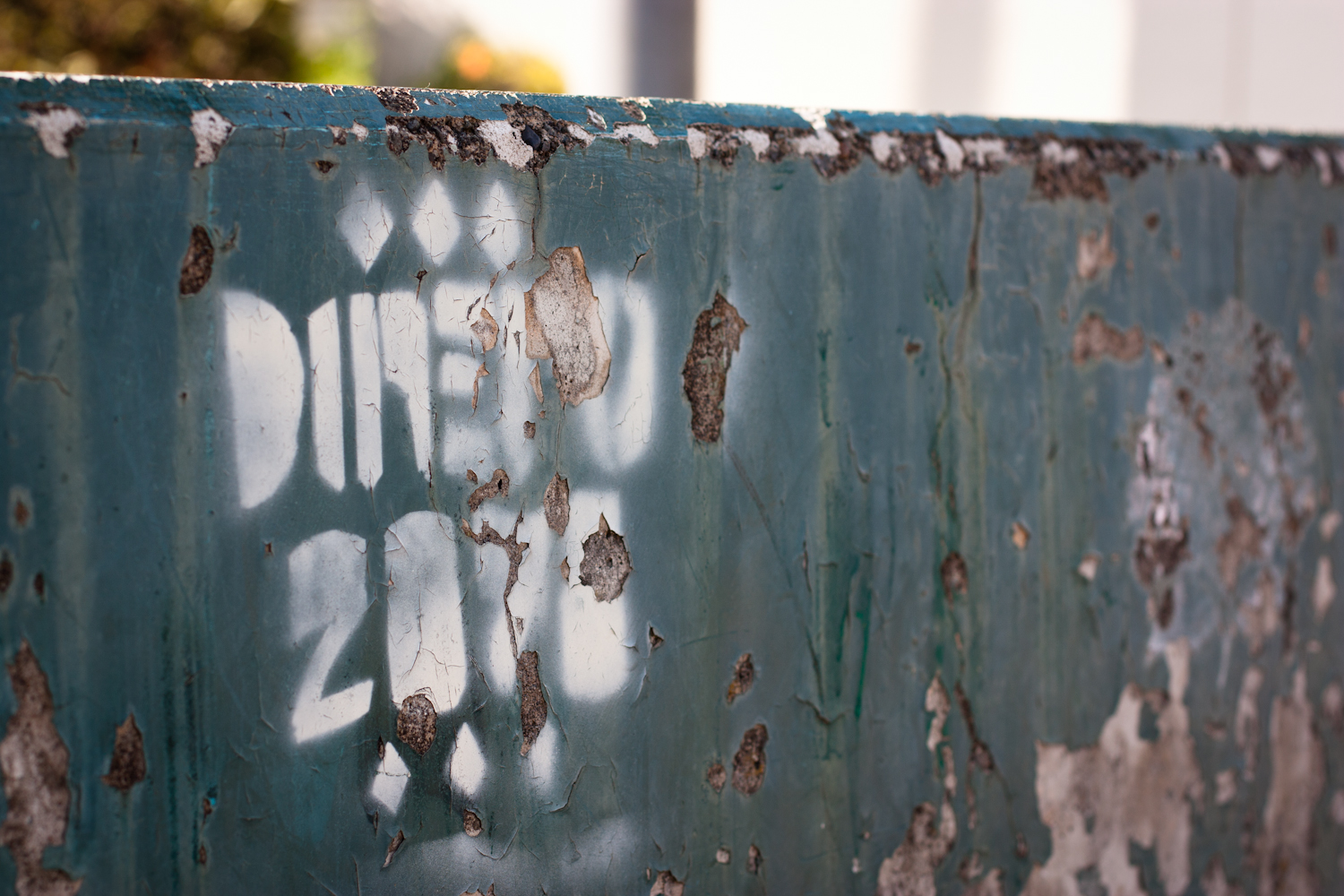 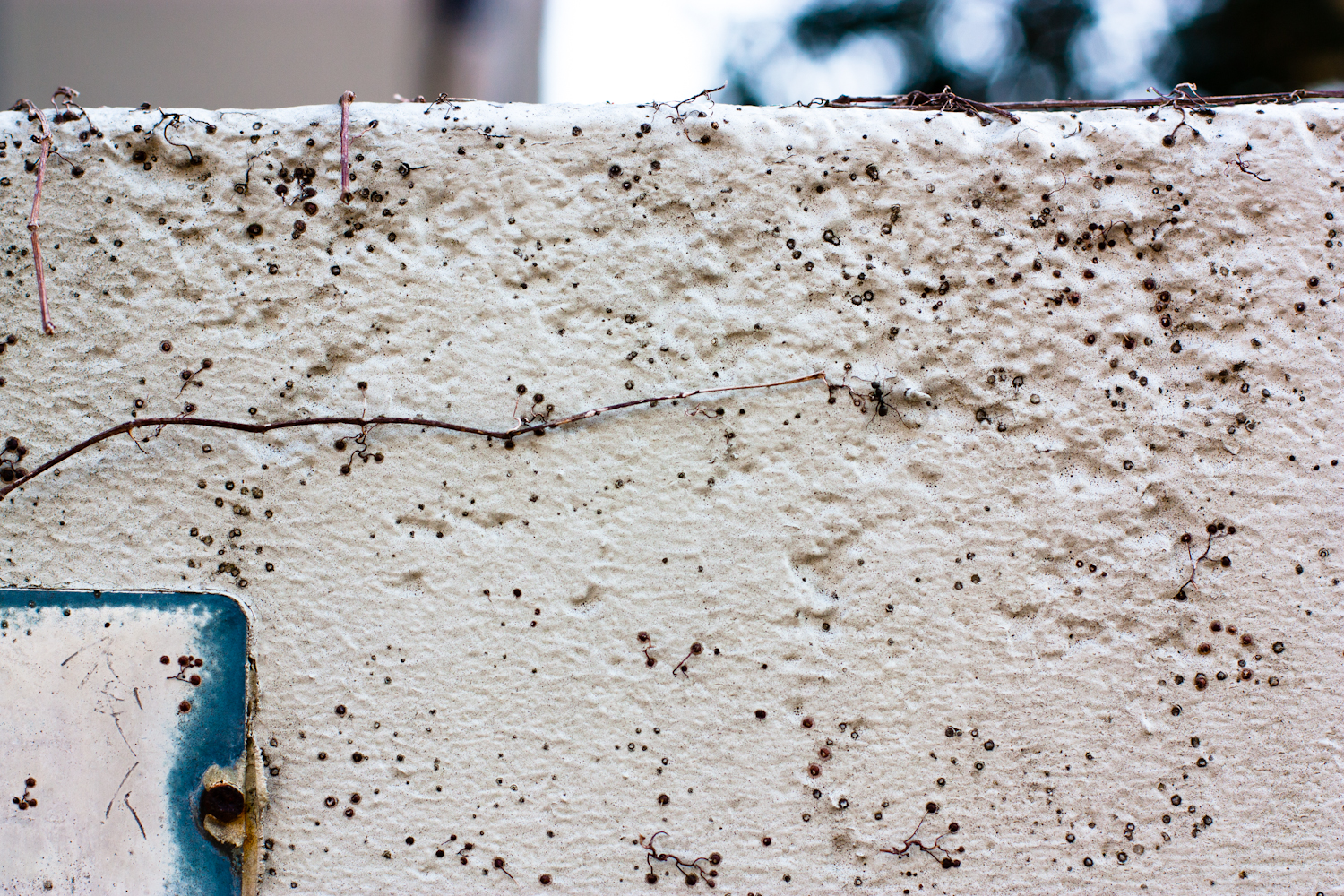 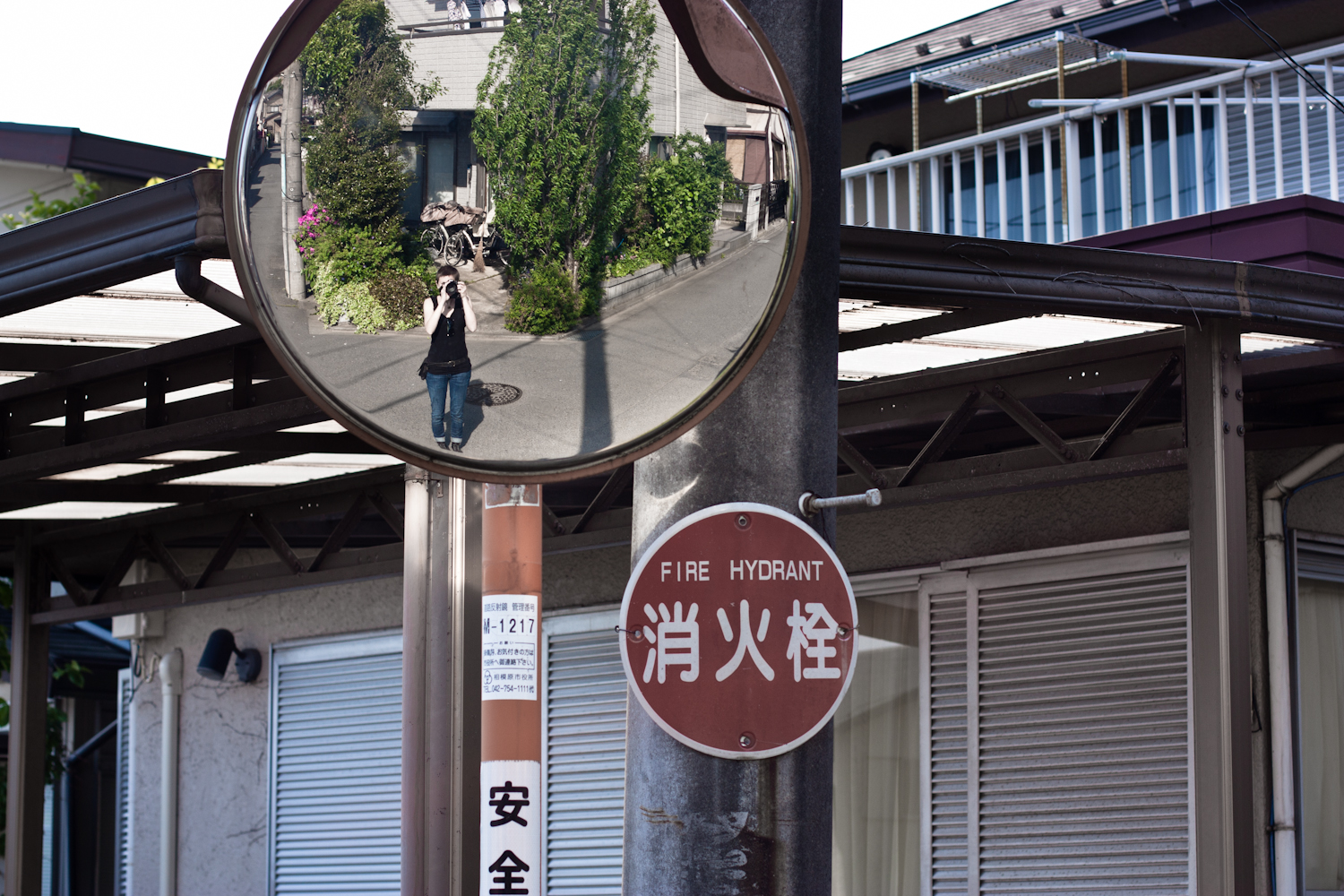 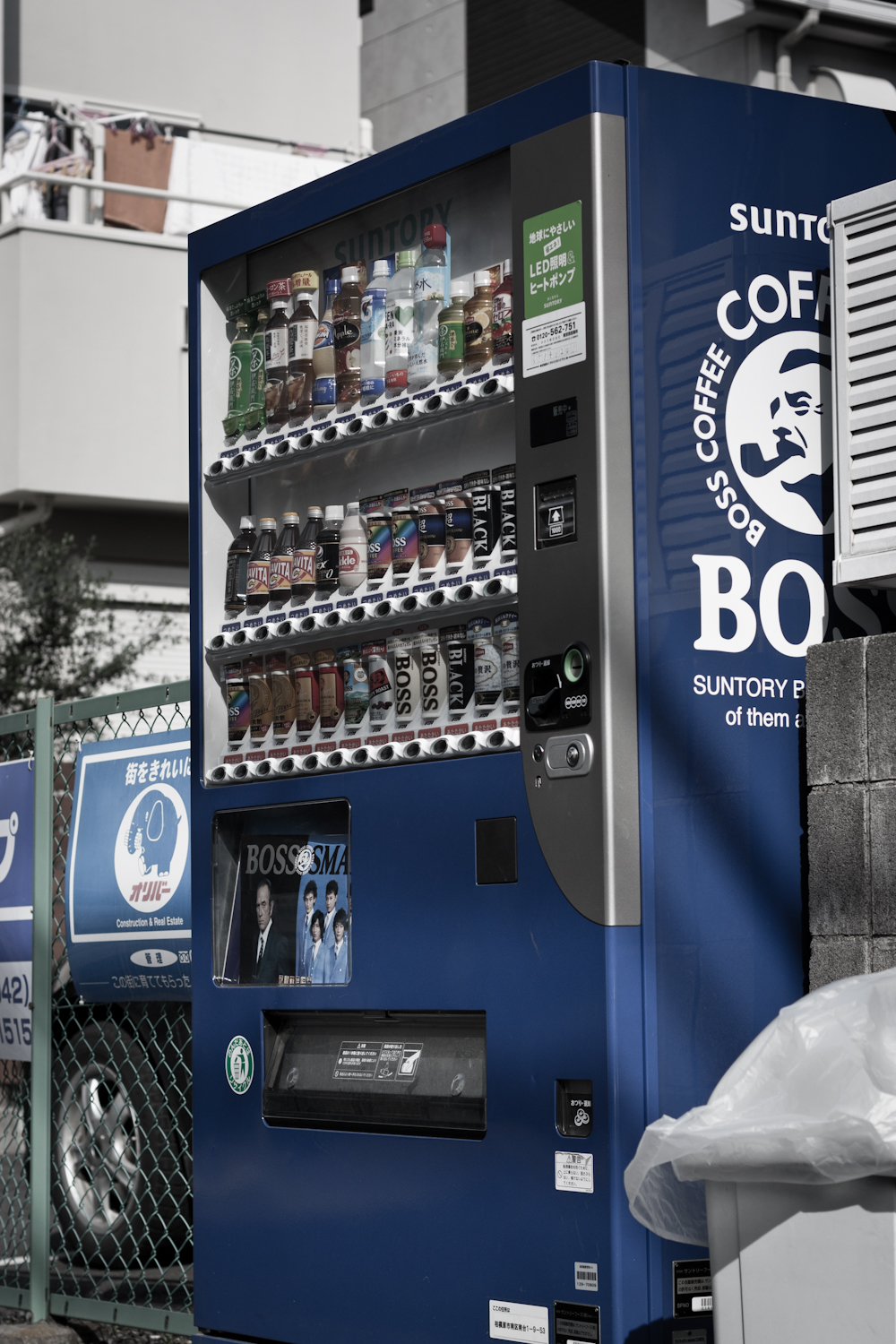 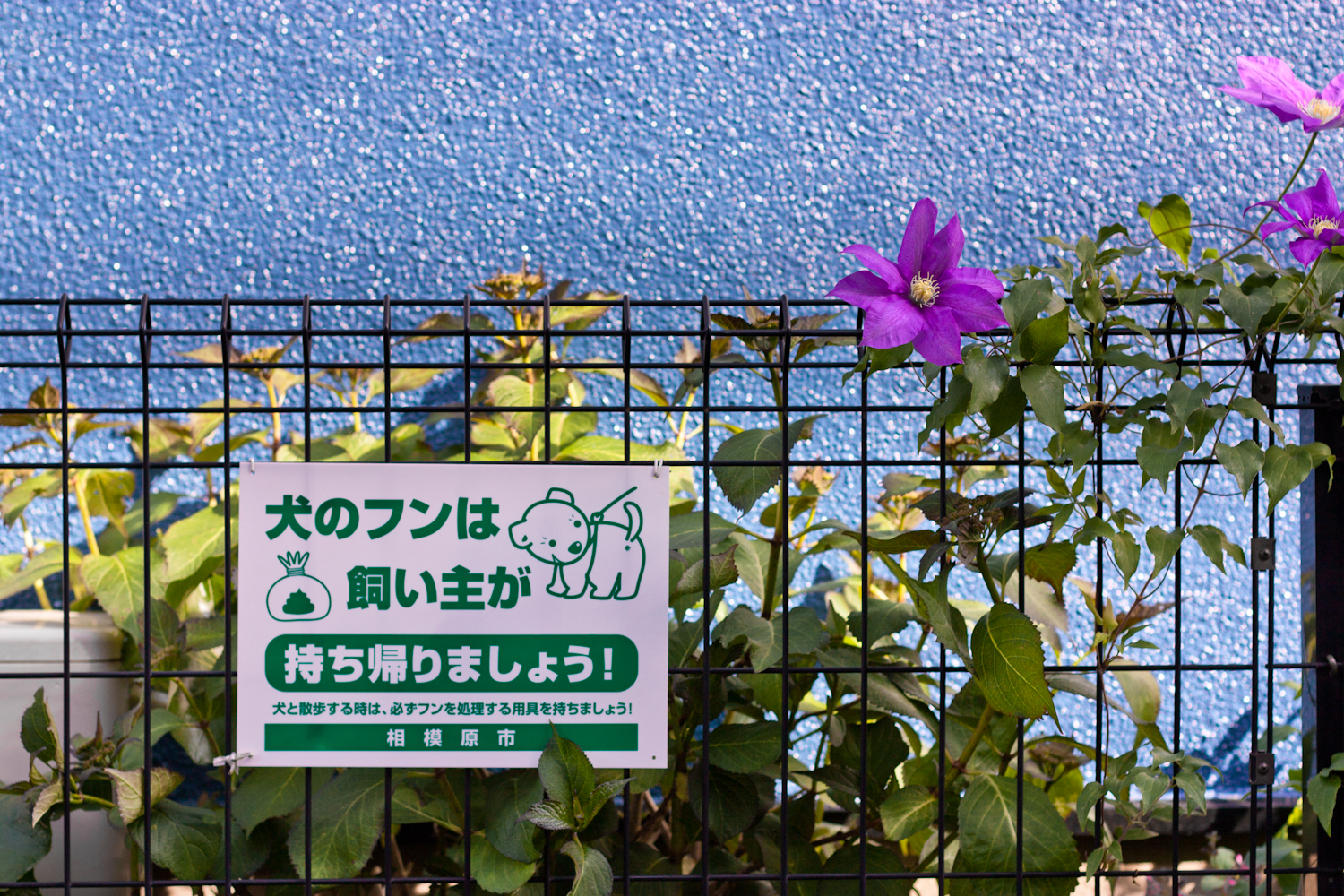 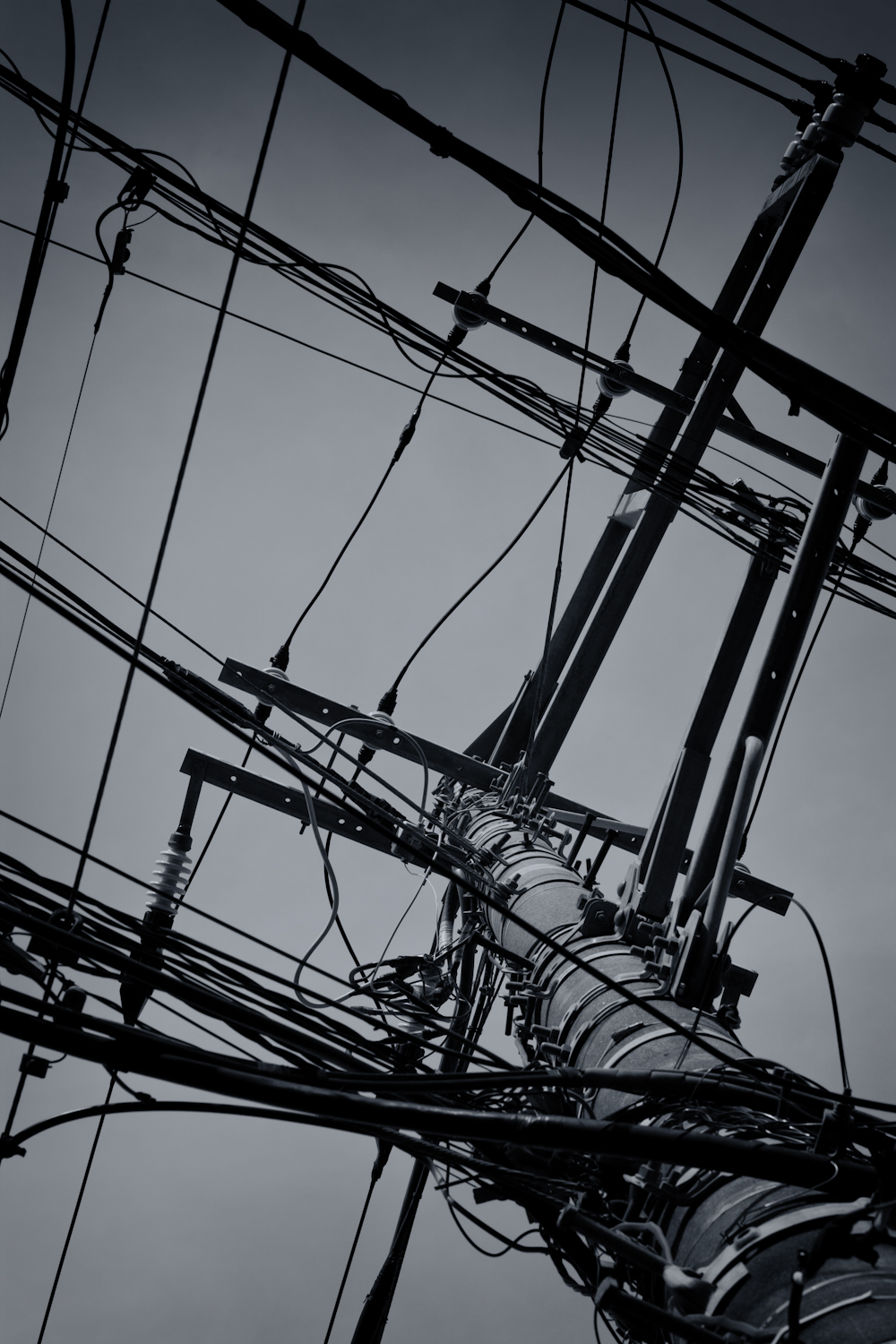 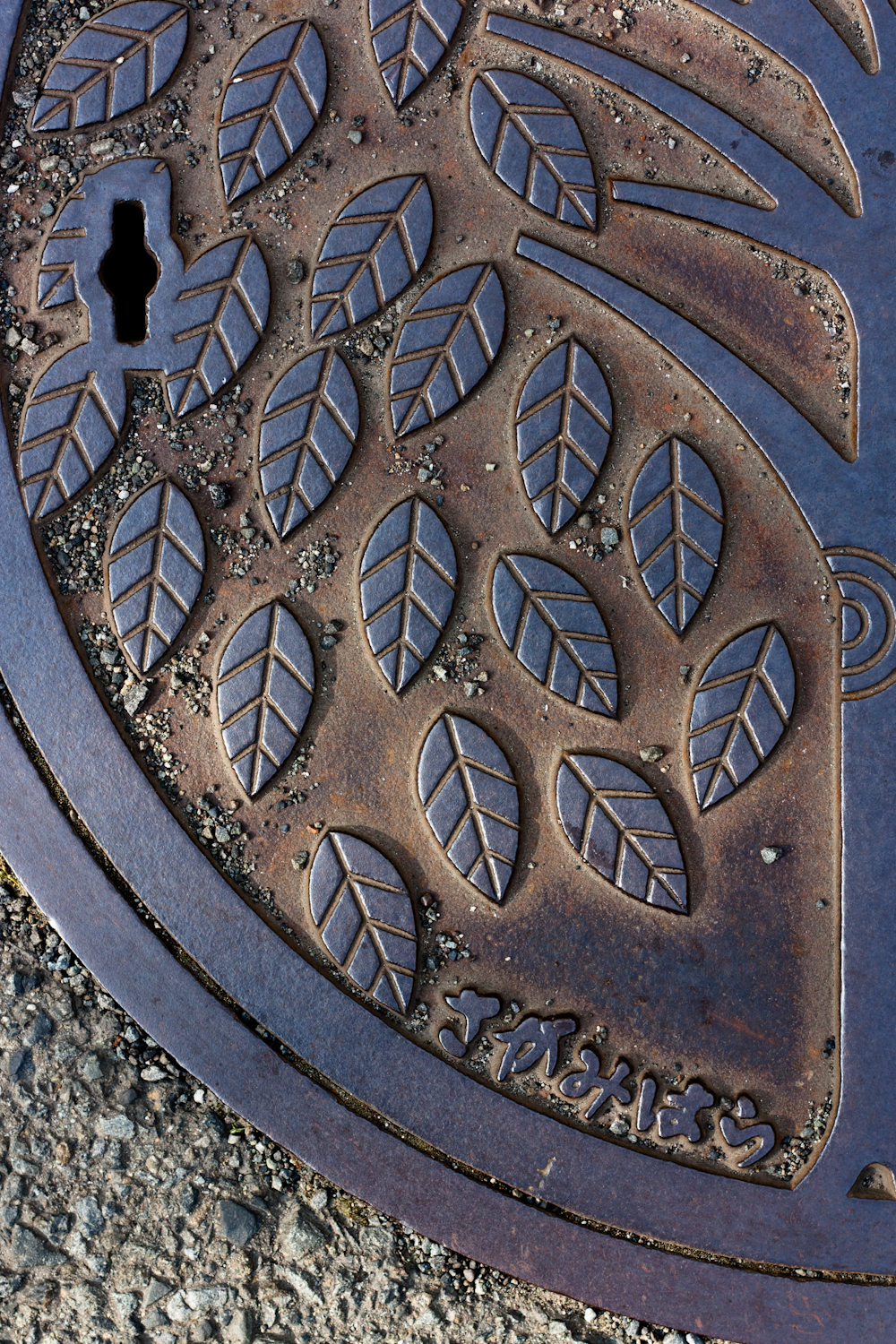 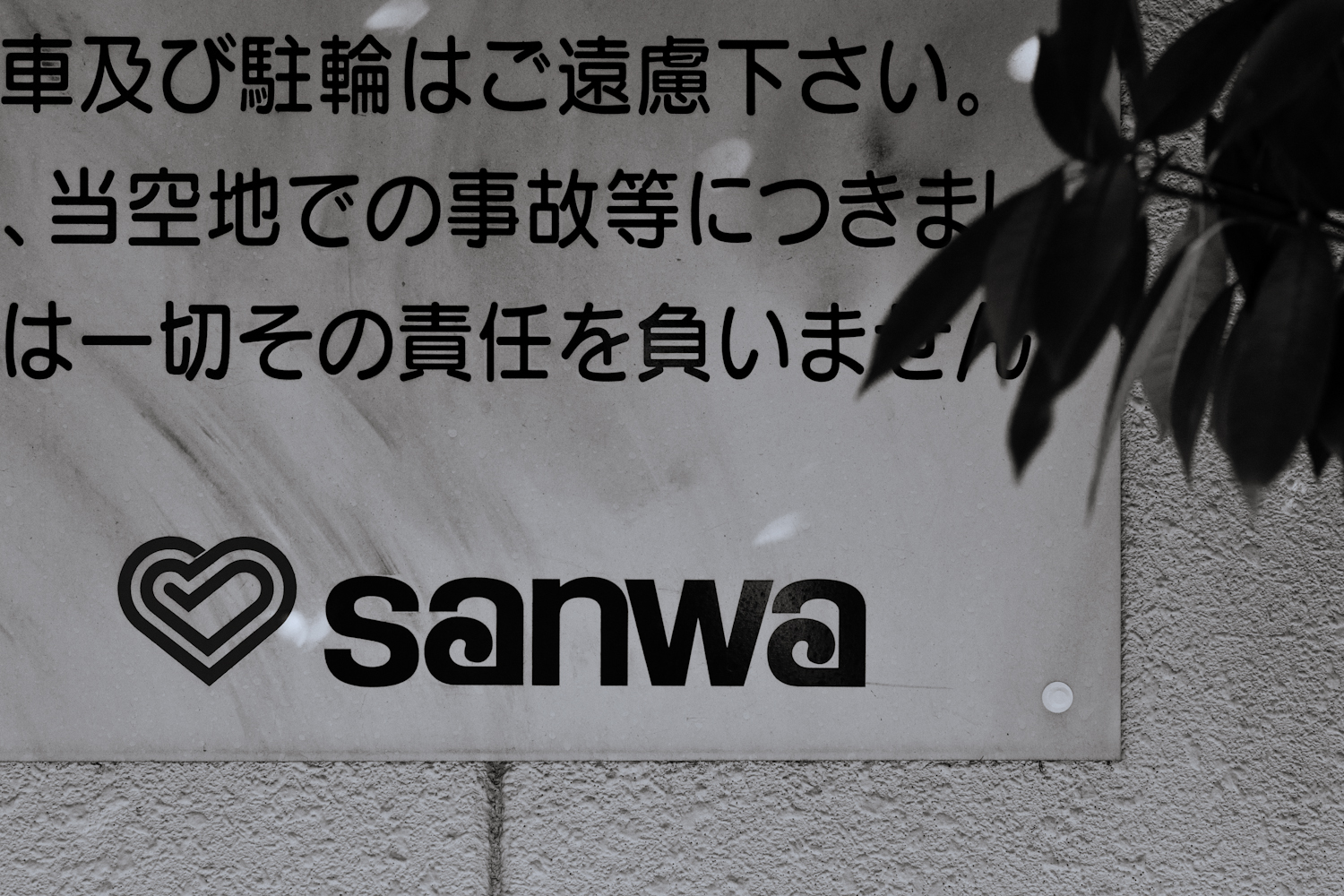 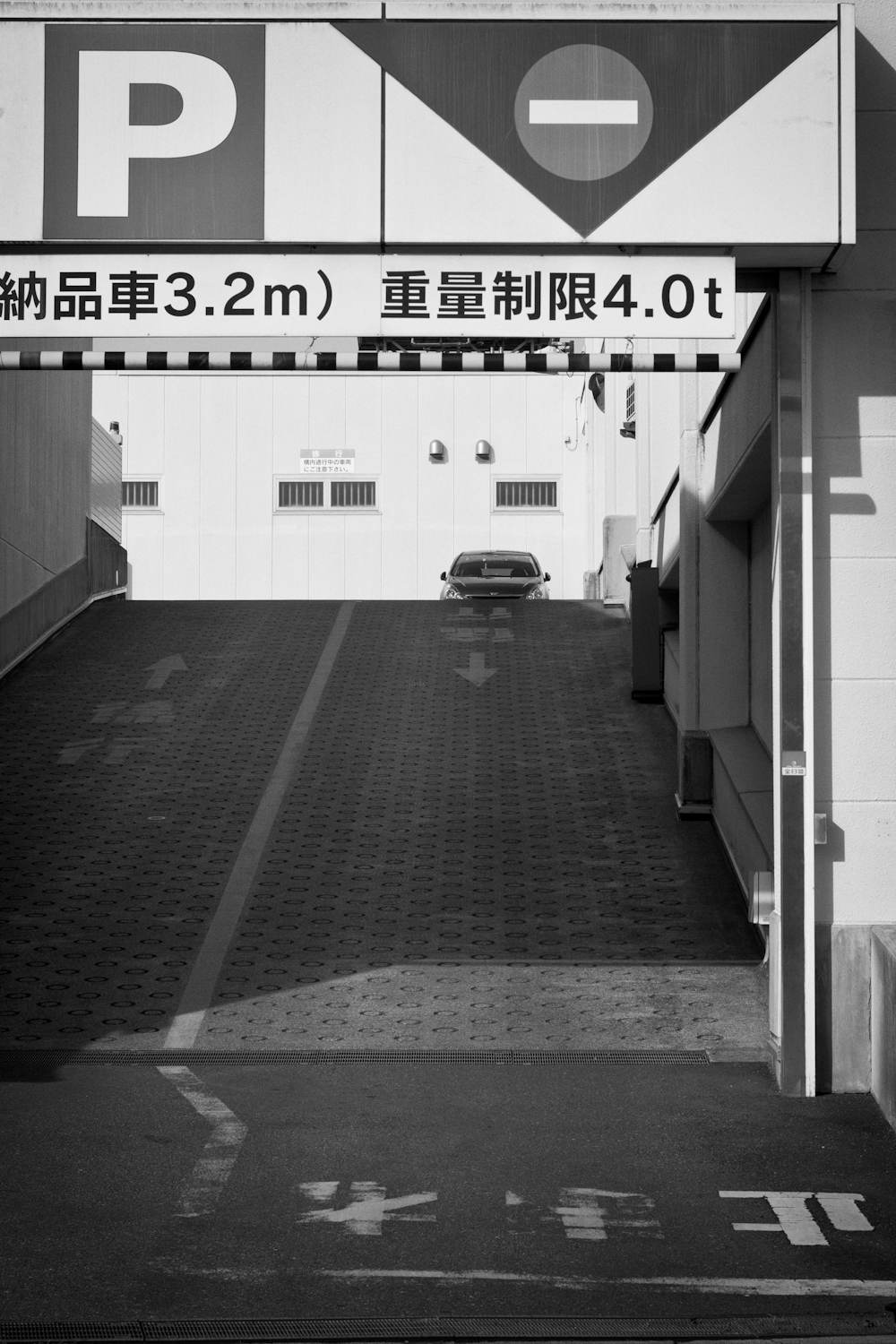 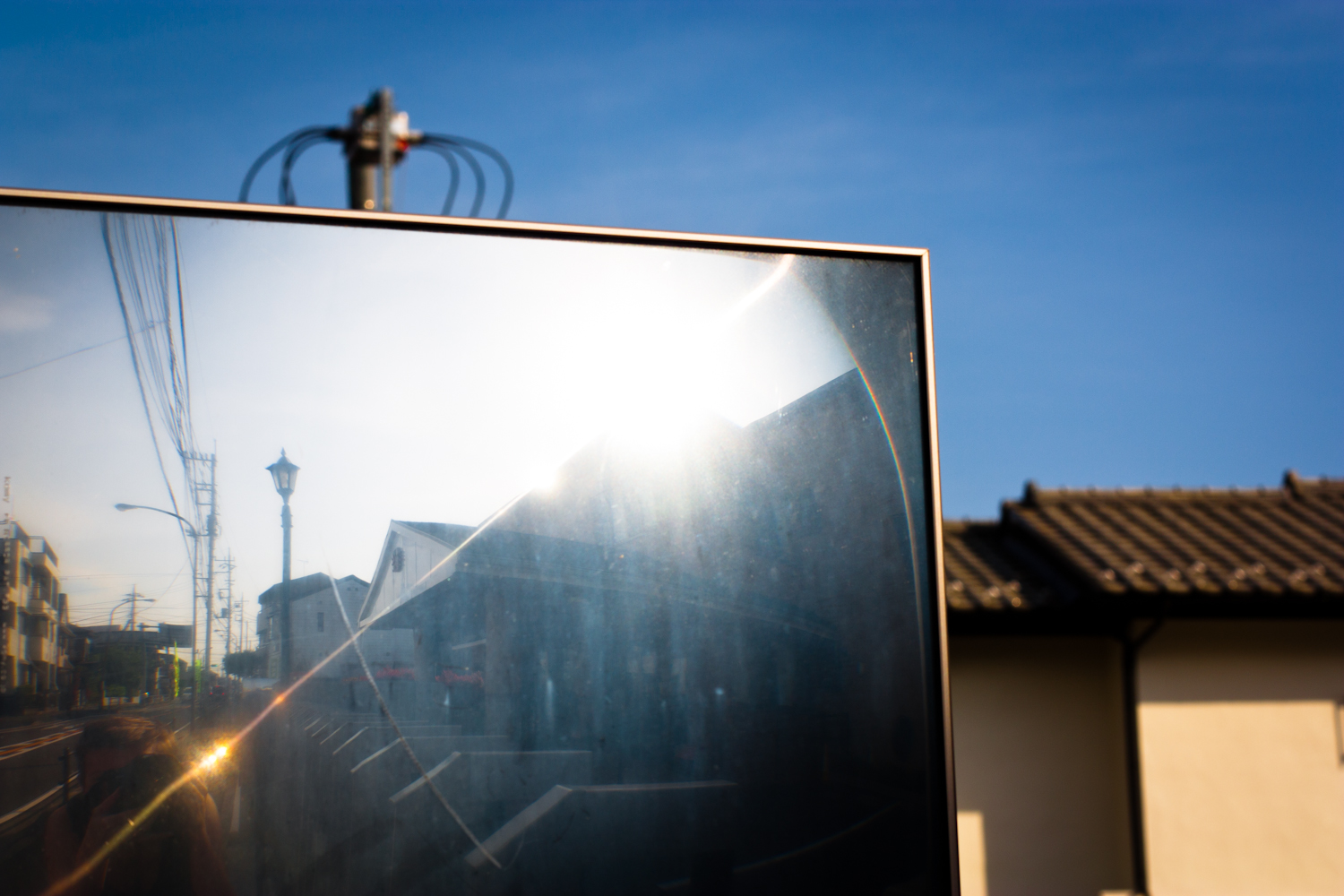 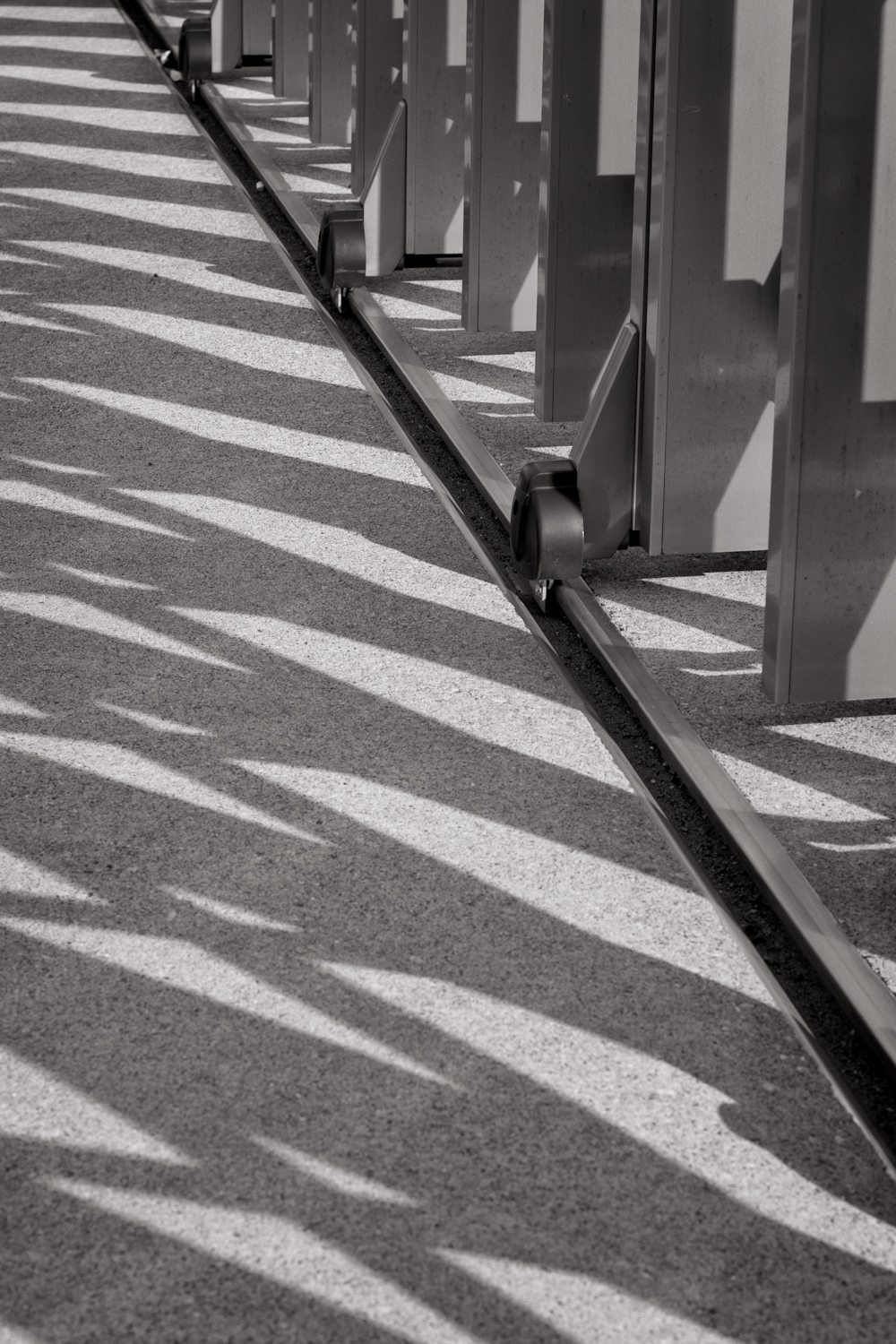 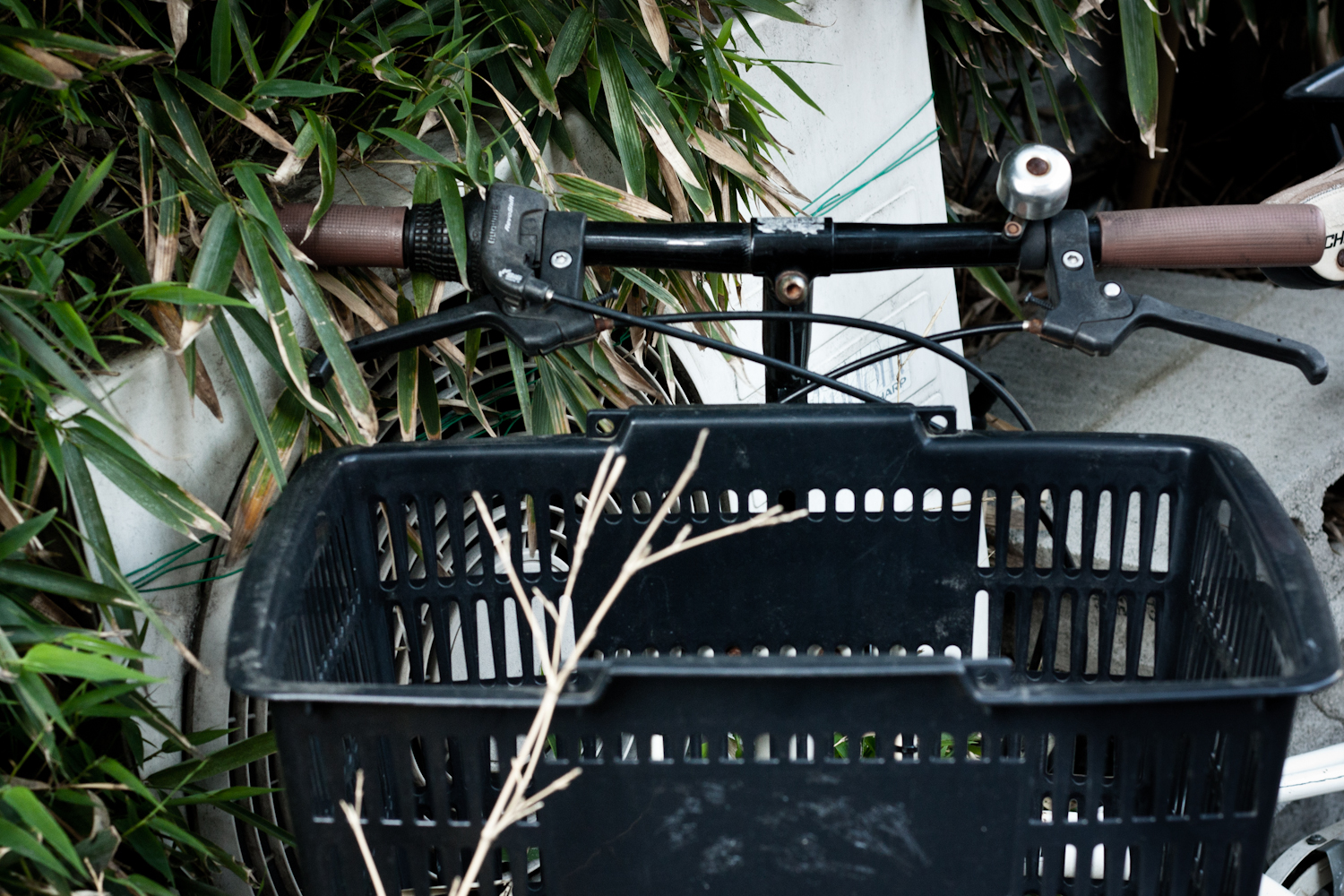 * No prior photos can be used

* Suggestion: Keep your camera nearby

For a real challenge, use the first photo you take of each item. Personal integrity is at stake = your conscience may haunt you!

No matter how much kitchen counter space you have it is never enough.  You begin with beautiful, clean, flat surfaces and before you know it you are shuffling and shoving objects around for more work space.  This is how our kitchen began: 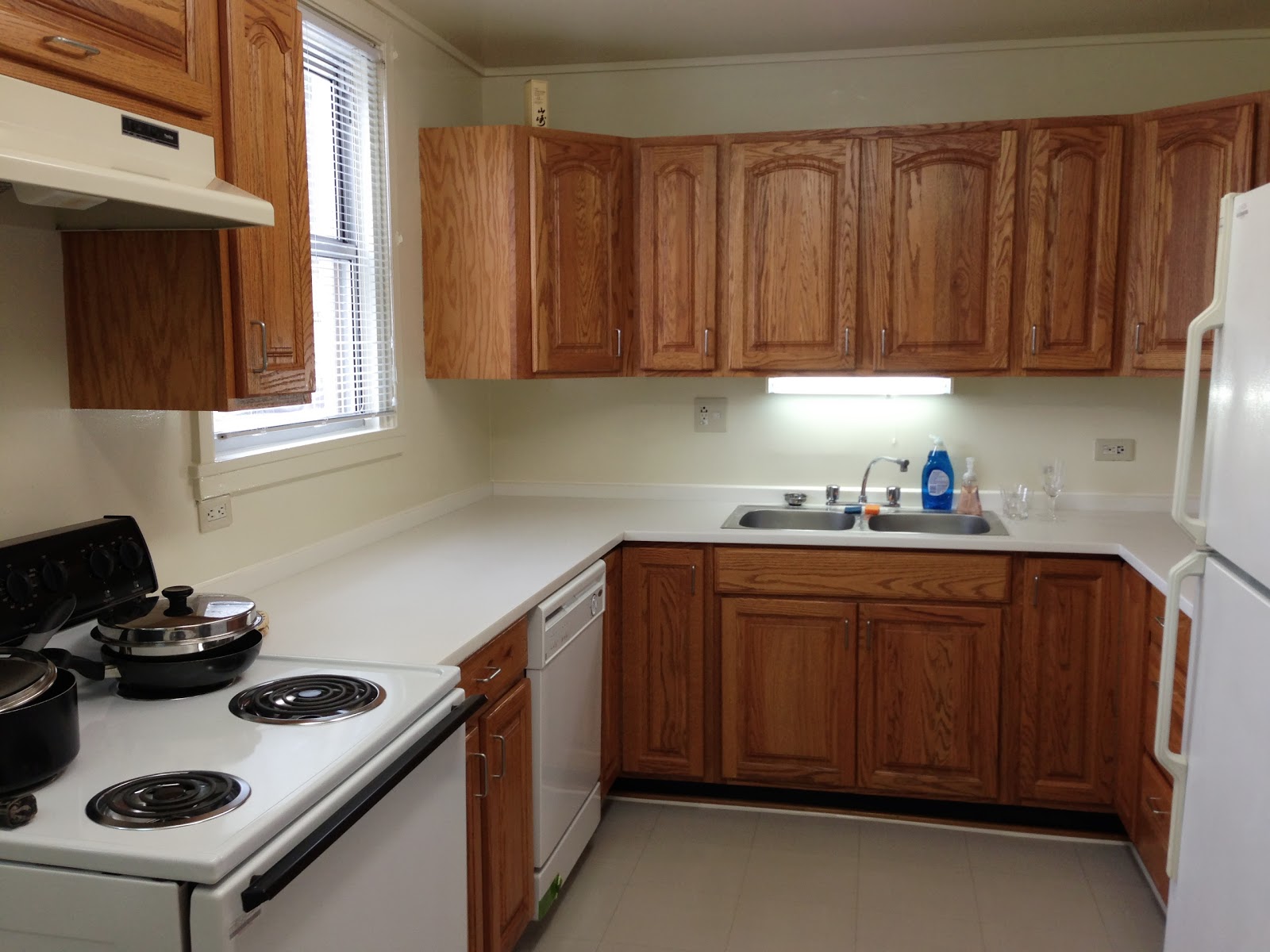 And this is what it looks like now, for real.  I just walked in and took this photo without touching anything.  It's on the cleaner side but I can guarantee that whenever you see a photo of mine taken in the kitchen I have most certainly moved things around for a less cluttered frame.  Notice how you do not see the top of the cupboards. 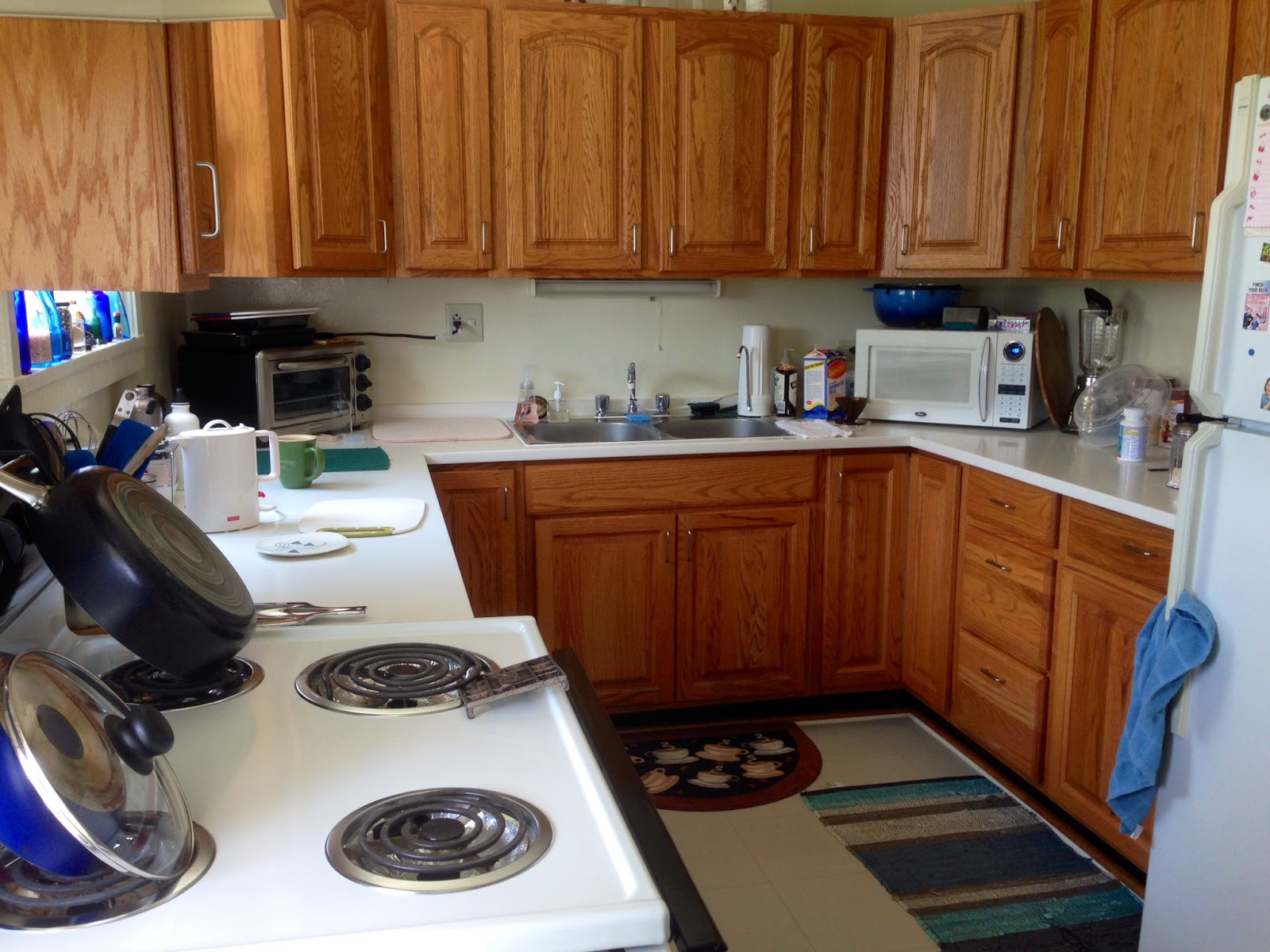 I have wanted hanging produce baskets for a while now and keep my eyes open for them at second hand stores.  Yes, I know they are not expensive, Amazon sells them for about $10.  But I love projects, especially ones that are easy and save a little money, and my do-it-yourself hanging basket is exactly that.

Daiso is a large Japanese chain of ¥100 stores (they even have a few along the west coast of the United States) that I have mentioned in previous posts.  It's equivalent to the Dollar Tree stores but with a much better selection in my opinion.  I bought the 4 items needed for this project there, hence costing approximately $4.25 and an hour of my ample spare time. 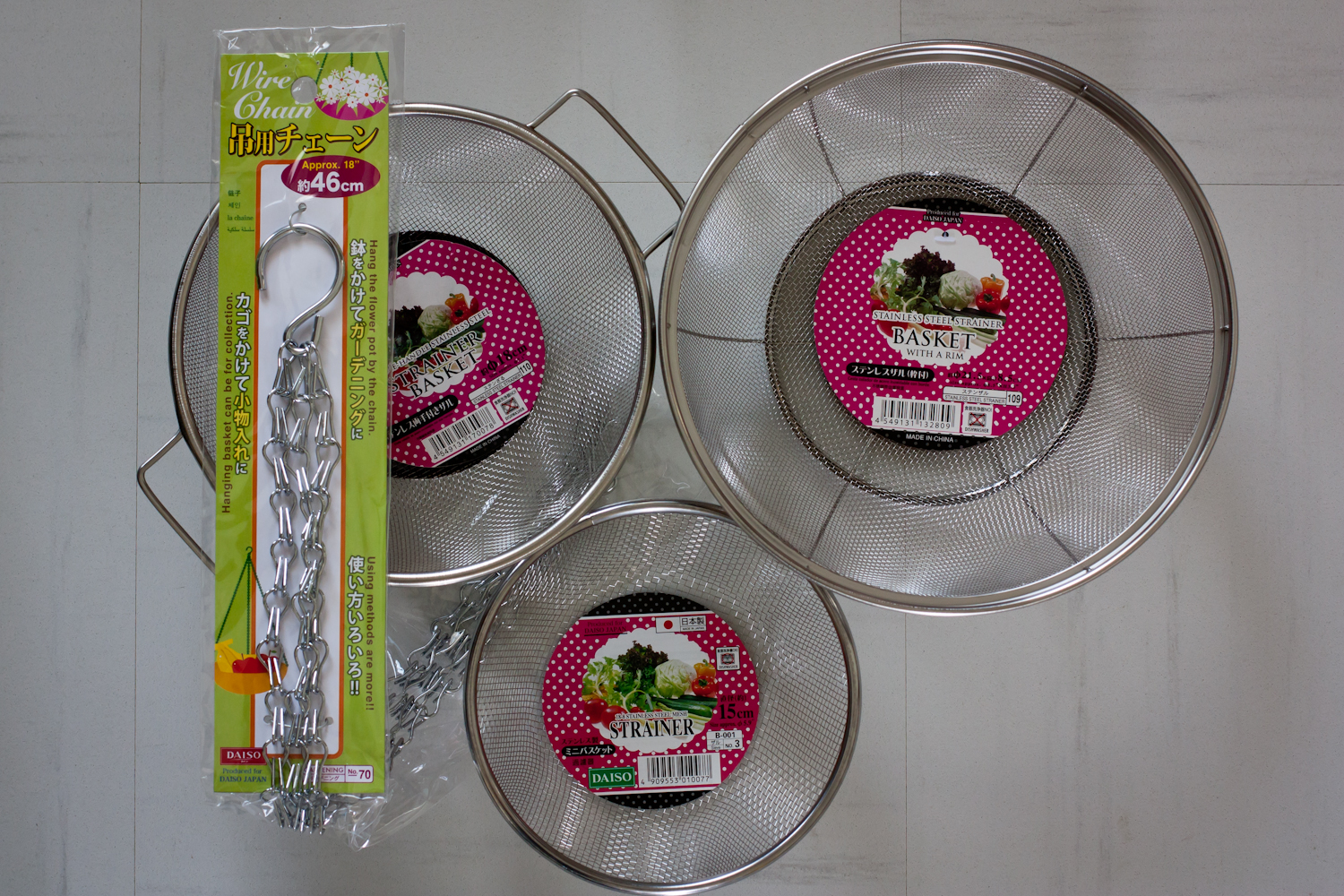 I purchased three wire mesh baskets and a chain designed to hang a flower pot, the latter of which I already have but it's in storage somewhere in Texas.  To keep the integrity of the chain I used links from a jack chain to form small hooks to attach the baskets, thus making them easily adjustable as well.  I found them in my miscellaneous hardware boxes that I proudly love and care for meticulously; I've had them, and some of the contents, for over ten years. 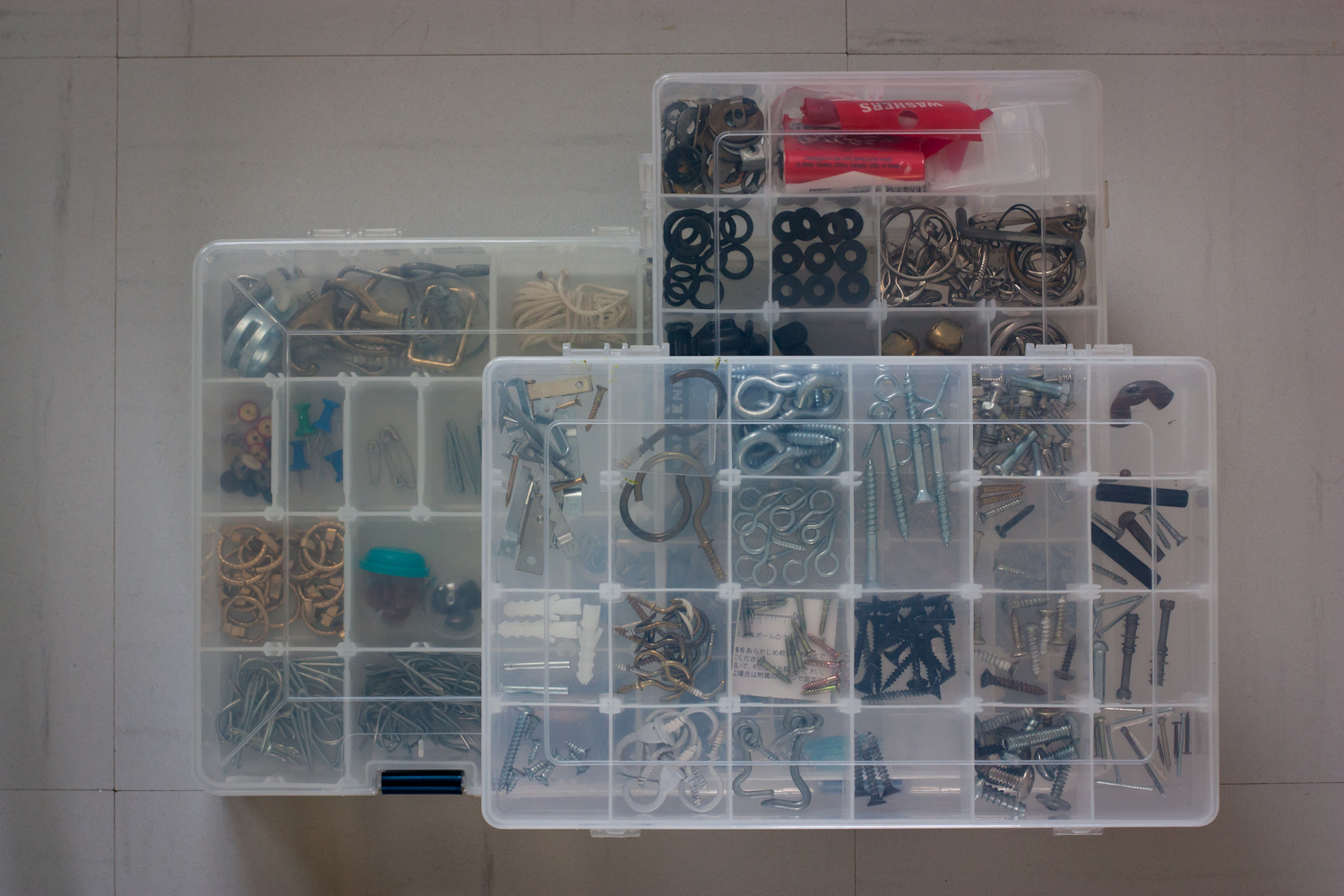 With a pair of needle-nose pliers I attached three hooks around the outer rim of each wire basket approximately equal distance apart but didn't bend them closed in case adjustments were needed.  I began with the smallest basket, looping the hooks through the chain as high as I could while still being able to put my hand in to retrieve an item, which ended up between links 6 and 7.  Then I found the middle of the remaining chain length and looped the second basket at that location, between links 14 and 15.  The last and largest basket was then hooked on the last links, obviously.

However, when I lifted the entire unit it was a bit uneven, for two reasons I discovered.  First, there was one less link on one of the three hanging chains, 20 instead of 21.  To solve this I simply added an extra link from the jack chain I was re-purposing.  Secondly, my spacing of the three hooks around the baskets' perimeters was a bit skewed.  Since they had not been tightened closed it was easy to re-position them and level the baskets.  Once I was satisfied with the positioning I tightened the hooks.  Done. 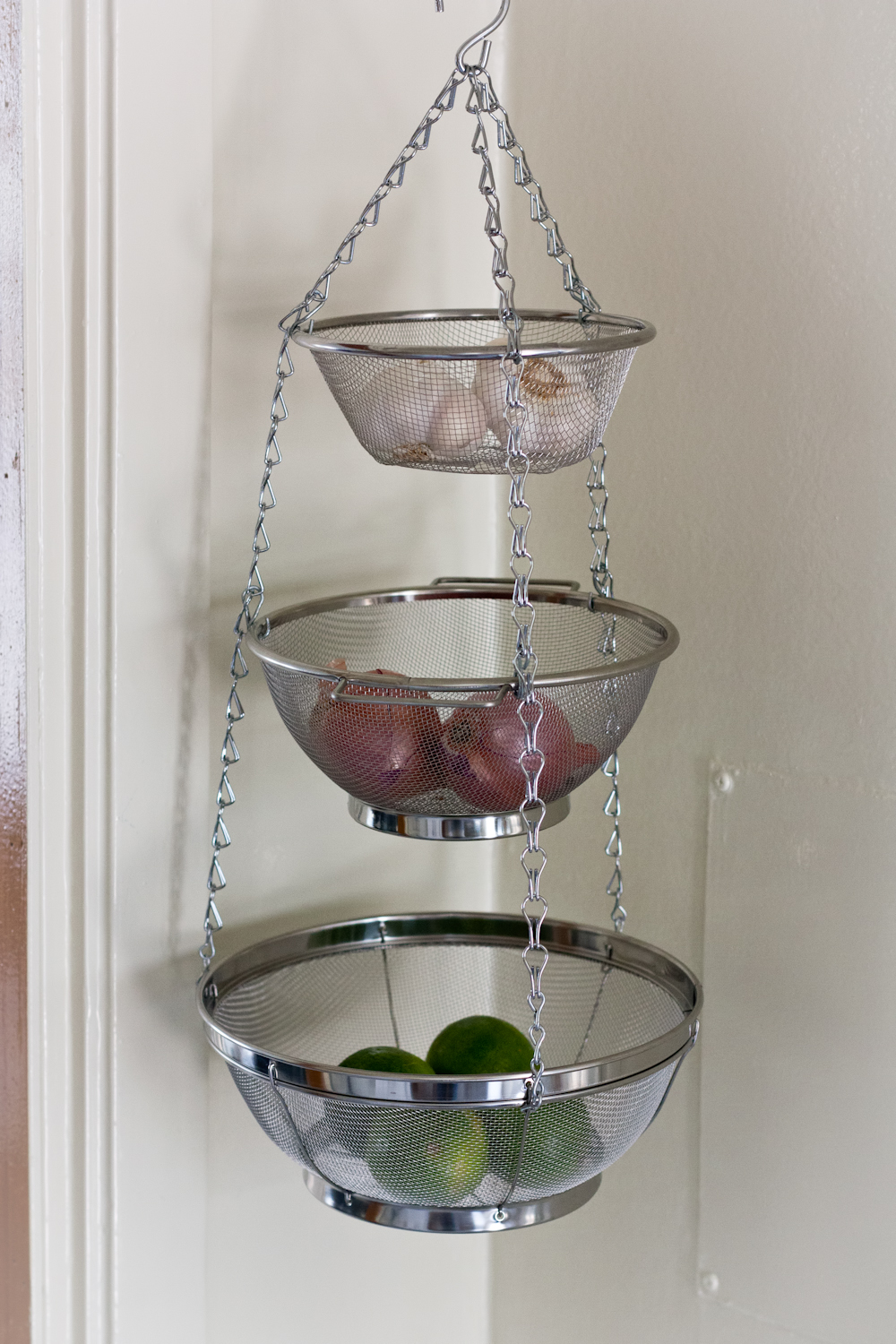 To hang it from the ceiling I drilled a hole, screwed in an eye hook, and used some extra chain and a clip to hook it up (all from my hardware stash).  This makes it fully adjustable if I change its location around our current house and where ever we move in the future. 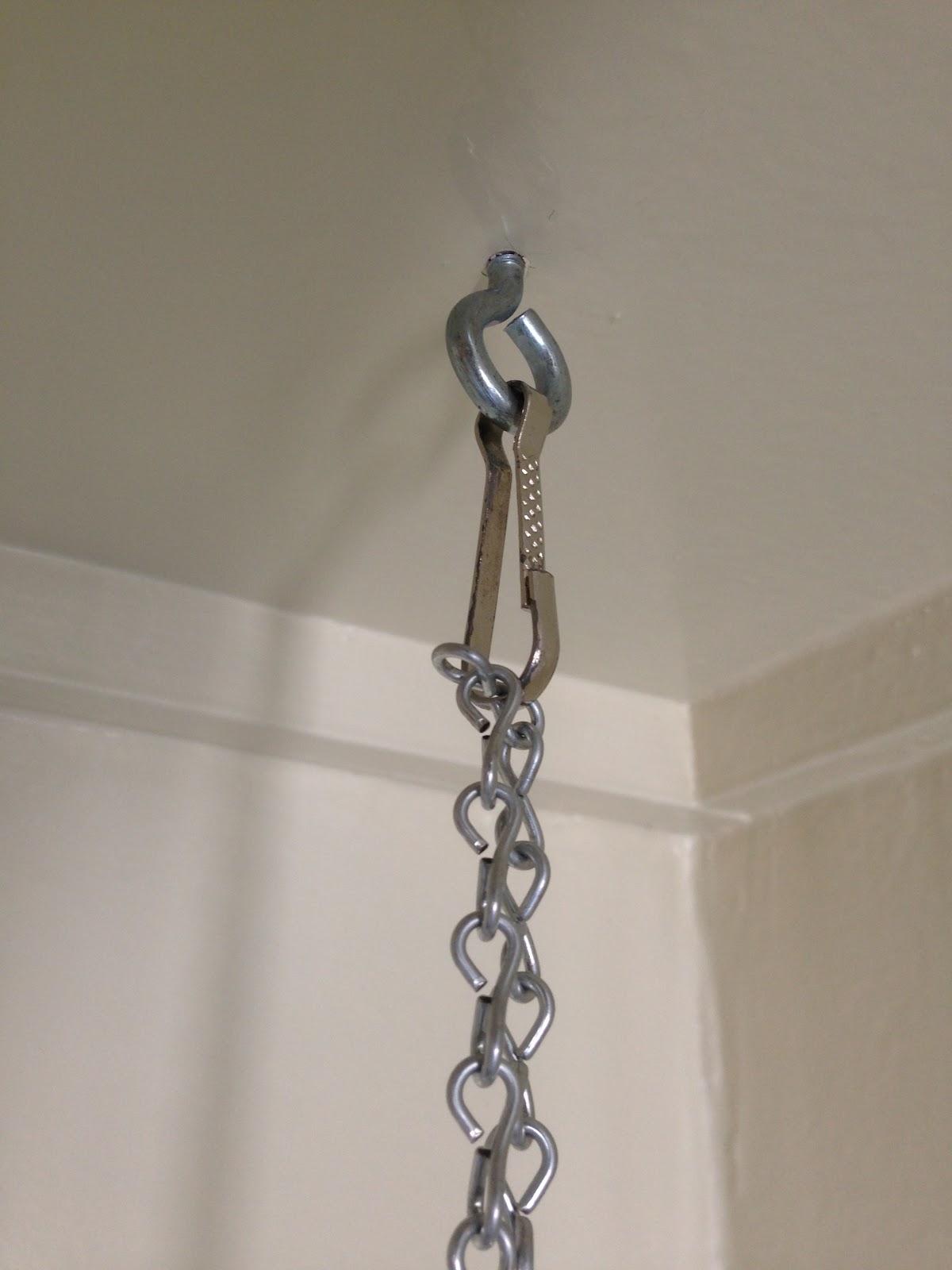 Here are some detail photos of how I hooked the baskets on.  Some of the "S" hooks are scratched up a little but they sort of nest in the other links and I don't notice it much. 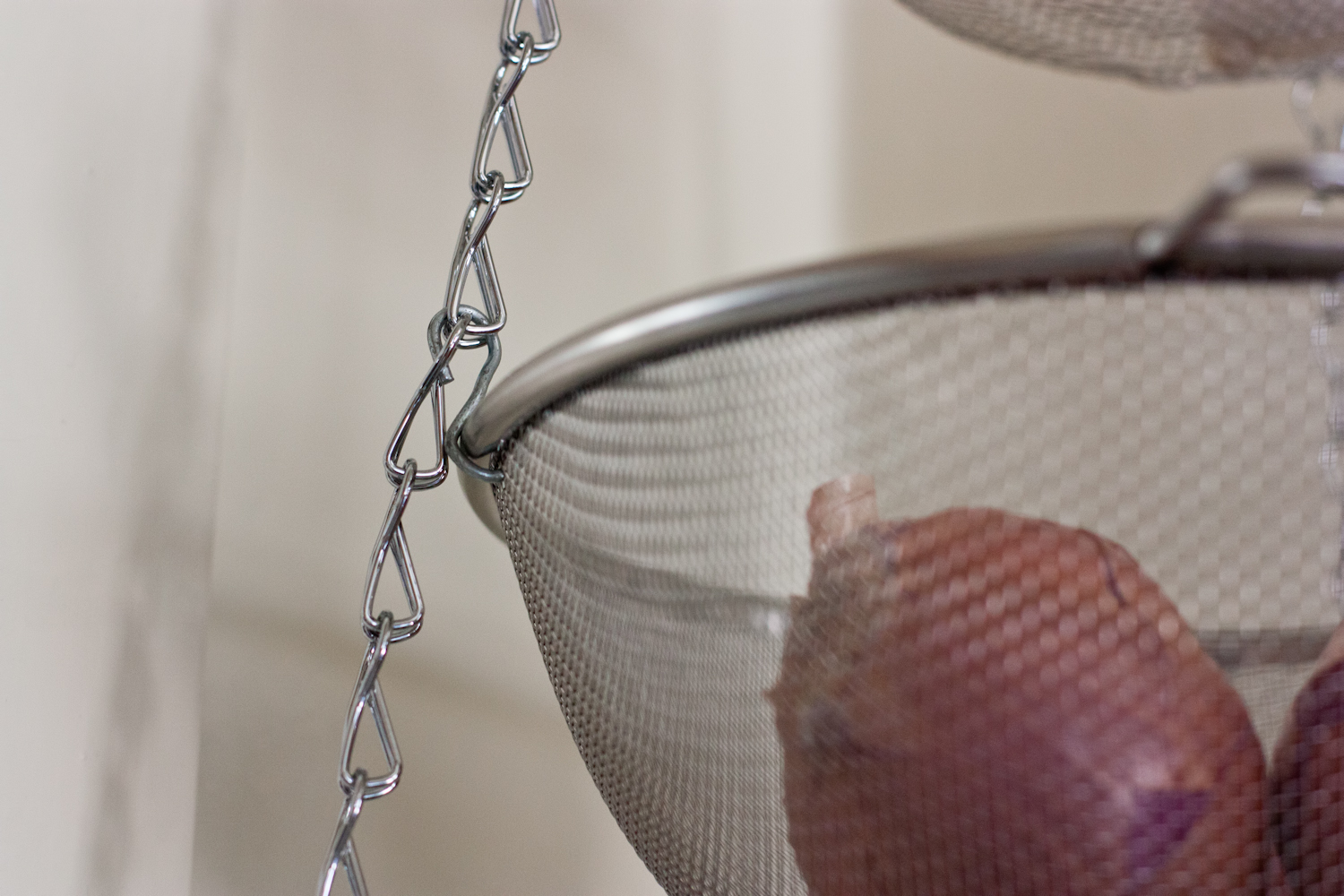 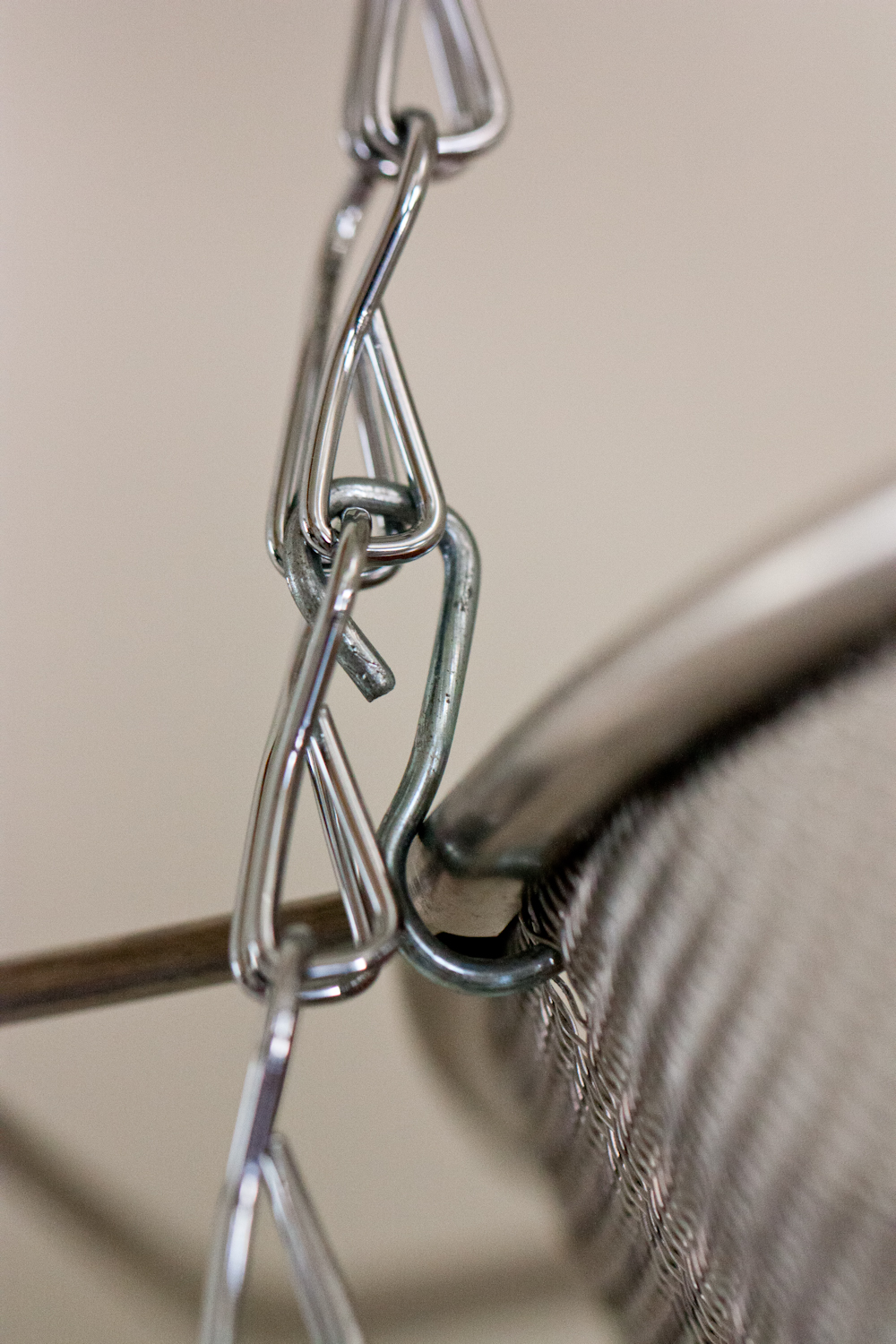 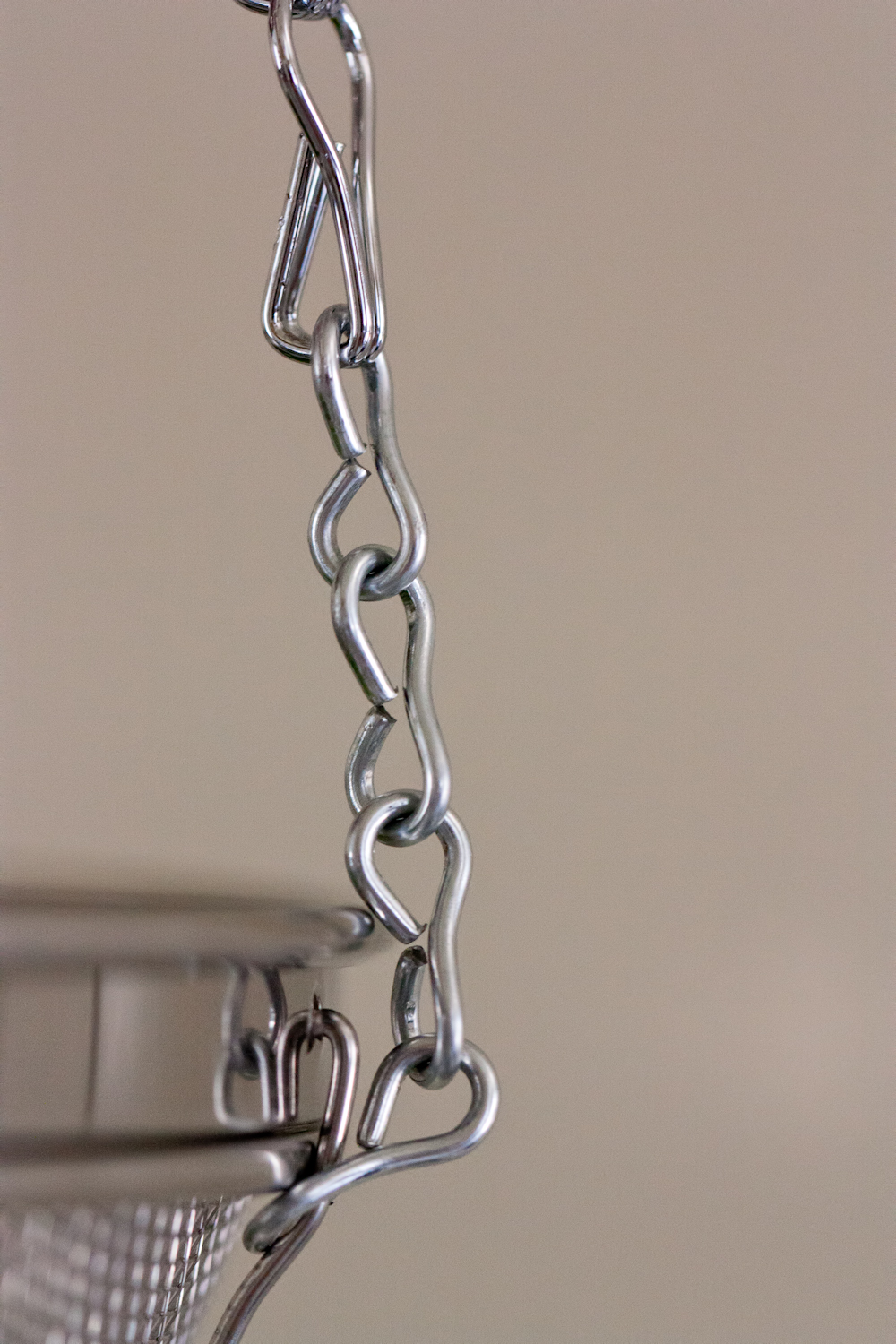 The photo above shows the extra link I attached to make up for the chain that was one link short.  In all I am very happy with the results and imagine that similar baskets would make corners useful in multiple areas like the office or bathroom.

While typing this out I had company with me, making sure I stay near and remember his dinner. 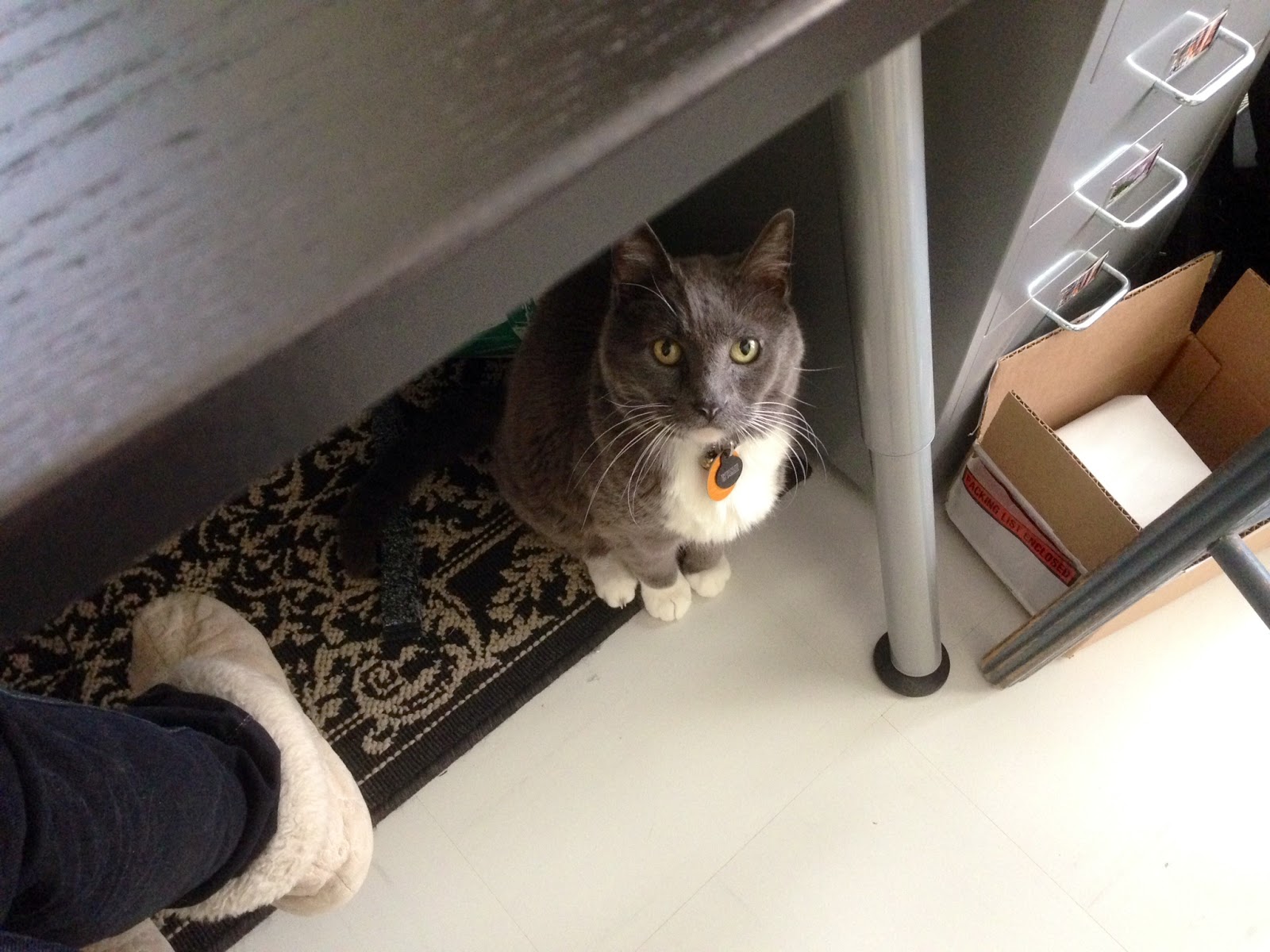