My Christmas enthusiasm diminishes a little each year; my love of eggnog however, does not.  In the States I seek out locally-made eggnog because it is generally better than the mass-produced, bland eggnog distributed at great distances, including overseas to military commissaries.  I am thankful it is available here at all, as many other people probably are too, but I do not settle for Darigold eggnog.

Around Thanksgiving I began researching eggnog recipes, looking for traditional and unique flavors.  I found three. 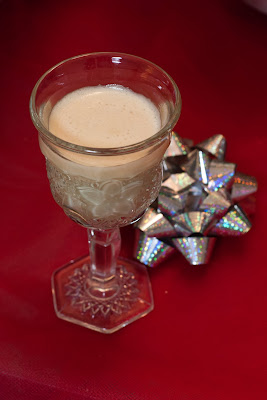 The first batch of eggnog I made was from a New York Times recipe, Nog: The Hard Way, and I followed it exactly with delicious success.  The consistency was smooth and satiny, not too heavy, and the sweetness and the dark rum hit you at once.  My husband selected Coruba Jamaican Rum that happens to harbor incredible brown sugar qualities that marry so well with the creamy nog.  I did not find fault anywhere with this recipe, it is an excellent, classic eggnog.

Calder Dairy, whose farm is located between Detroit and Toledo, has a storefront in Lincoln Park, a downriver suburb of Detroit.  If you are familiar with the area then you may know about their eggnog and may love it as so many people do.  A few years have passed since tasting it last so I forget its unique nuances, my husband remembers better.  Therefore the second recipe I made was one claiming to be theirs.

Calder Dairy’s eggnog differs in its preparation from other traditional recipes because it includes gelatin instead of egg whites to gain the thick, velvety texture.  I assume this is due to packaging, distribution and freshness retention.  It also only includes enough rum to flavor, not enough to sufficiently booze it up for a party.  Even though our Oster blender’s glass container proved a bit small for the job, I easily followed the directions.  Well, I thought I followed directions.

After chilling in the refrigerator overnight I removed the eggnog for finishing.  When I tried to stir it, however, the wire whisk merely bounced off the top.  It solidified entirely.  I must have added two tablespoons of gelatin instead of two teaspoons.  Determined, wooden spoon in hand, I continued with the recipe hoping the vanilla and rum would add some moisture. 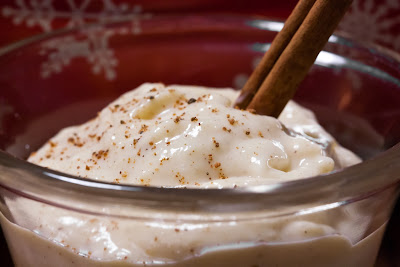 I knew drinkable eggnog was out of the question but why should eggnog live solely in one category?  I stirred and stirred and stirred until it resembled tapioca pudding.  I laughed when scooping some into a small dish, finding the situation hilarious, and then brought it to my husband to taste.  He was really looking forward to eggnog as he remembered it so he didn't find it nearly as funny as I did.  But he approved, the sweetness and the flavor were very similar.  I plan on making it again, but probably halving the recipe and paying closer attention to the gelatin.

Butterscotch Scotch Eggnog.  Got your attention, right?  Another NYTimes recipe, this certainly looked like unique eggnog.  I prepared the first half of the recipe the evening before Christmas but the amount of eggnog in my fridge concerned me so I delayed finishing it.  A Christmas dinner invitation spurred completion of the recipe, which I followed very closely.  The only change was using 1 cup of Brandy and ½ cup of Scotch because there was not enough Scotch left.  I used a Japanese grape brandy, Dompierre by Nikka, and Balvenie Doublewood 12-year Scotch. 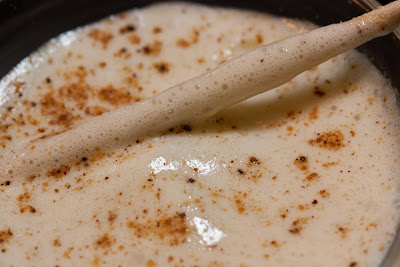 The recipe specifically states to use an electric mixer (which I did) and when to beat and when to whip.  Following these instructions led to lots of foam that didn't quickly dissipate, though the feedback from others was definitely positive on flavor.  This evening when I pulled the bowl of eggnog from the refrigerator the foam had floated to the top and seemed to have gone down just a bit, so I gently stirred it together.  It is still very foamy but delicious and drinkable, the Brandy and Scotch add a woody-quality that is divine.  Next time I make this I will use the regular beaters instead of the whisk.

After making the different eggnog recipes I learned that eggnog is not difficult to make.  Sure, just opening a carton is easier but for true nog joy you should really consider making it yourself.