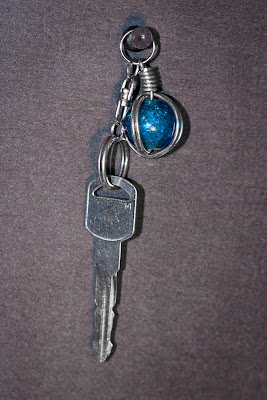 Some time around 1993 I went to the Gross Pointe Garage Sale with my friend Dave.  It was held in a parking garage and was really more a flea market/craft fair than a traditional garage sale.  My memory is embarrassingly poor and the only reason I recall the event at all is because of this charm which originally came on a black cord as a long necklace.  There must have been a two-for deal because I also bought another very dated piece that is hidden away in a box somewhere.

When unpacking after moving in 2005 I found the charm again, took it off it's cord and attached it to my keys.  My key chain always contains the fewest amount of keys necessary to leave the house and only one adornment.

I removed the other three keys for this photo's purpose but left my car key because it too is most certainly a favourite thing.  I purchased it brand new right after college and 12 years later I love it as I did when driving off the lot for the first time.


** edit addition **
The New York Times recently published an article on key chains with a number of interesting clip styles shown.  You Don’t Need a Lot of Brass (By DAVID COLMAN Published: November 14, 2012)
Posted by m. at 12:12 PM

Email ThisBlogThis!Share to TwitterShare to FacebookShare to Pinterest
Labels: photo a day