I believe in karma, not quite to a religious extent but I believe in the attraction of similar energies and the balance of positive and negative forces.  Specifics surrounding these ideas have changed as I've grown older but the basic premise has held solid for about twenty years.  Whether those concepts are accurate under the definition of "karma" I am unsure, but it is the term I use and the one most generally fitting for general purpose.


Since moving to Texas my exposure to insects has dramatically increased which has led to greater bug tolerance.  Much of this is due to organic pest control, a practice shared with me by a woman I met through an art guild a while back.  This resulted in keeping house spiders in strategic areas around the house to catch bugs.  In areas I once meticulously vacuumed I now maintain spiders and their webs which I see as bellwethers for what seasonal insects are around and where they are originating.  If I begin to see a problem I have no hesitation bringing out the giant jug of Ortho Home Defense spray and eliminating it.  But I keep the spiders.

My spiders are markedly house spiders who have a home and stay in it.  When I see an obvious outdoor spider indoors I will kill it usually without hesitation.  I will also destroy the egg sacks of my kept spiders, only because I once witnessed the hatching of one and it looked like an epic CGI version of spiders boldly jumping from the sky like soldiers on D-Day.

My favorite spiders are the ones I've had the longest, which include the one under my bedroom window sill and the one under the lower cabinet by the stove in the kitchen.  I have been known to catch stray rolly pollies and carefully roll them into their webs.  There is also one who makes a quiet life in the corner of my office behind the door.  I forget about him but he always seems to have a full web when I do remember to check up on him.  A more recent addition is the one living under the coffee counter ledge above the lid of our kitchen garbage receptacle.  He makes a haphazard web down the length of the bin, catches his prey near the floor, then somehow carries it up to his lair.  I've never actually seen this happen but every morning he seems to have a new treat three feet above the floor and I get my hand caught in the web while brushing the coffee grinder into the trash.

Since practicing this pest control method the number of stray insects in the house has significantly decreased. I don't know if I can solely credit the spiders but I certainly believe them to contribute a large factor.  Now where does karma play into all this?

Yesterday afternoon we had our mandatory insect control spray treatment at our house.  This is the first time we have had to do this and my concern for the spiders' welfare was great.  I asked the guy if it would kill spiders and he said "yes."  I prepared for the inevitable.  So far only one spider has died, unfortunately it was the one by the stove.  I checked on her and didn't see her snuggled up in the corner as usual; I hoped she had retreated further back.  When I checked again later I found her curled up on the floor.  I gently blew on her and saw her legs slowly move -- I knew she was dying.  With sadness and a heartfelt apology I smooshed her under a paper towel.

The other spiders seem to be doing okay so far.  Unfortunately, by this time karma had already kicked in.

While the treatment was occurring I sat outside on the front porch with the kitty in his carrier, my Kindle in one hand a cold Kombucha drink in the other.  My sister called and we chatted for a bit.  During the conversation I felt an itchy burn on the top of my foot and instantly knew something bit me.  I assumed it was an ant, the main reason I do not step foot on the grass in Texas if I can at all help it.  I took an antihistamine and spread some hydrocortisone cream on it.

Overnight the pain and burning woke me up repeatedly and by morning my foot had swelled and my leg was tingly.  I took an antihistamine, a photo and accepted my dose of karma. 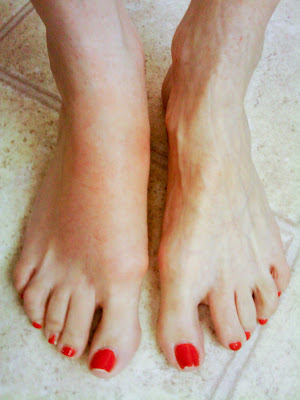 Email ThisBlogThis!Share to TwitterShare to FacebookShare to Pinterest
Labels: Texas