New Tool for Black and White.

I wanted this software so bad but could never justify spending over $100 on plug-ins.  I also wanted a Wacom Tablet as a mouse alternative to avoid overuse of my hands but, again, cost consistently trumped purchase.  Then I found the combination package on Amazon, sold by Adorama, for $130.  Happy birthday to me!

That was in January.  The following months were difficult for me, I had little time and even less focus.  Then came time to prepare and navigate an overseas move and even more time passed waiting for our household goods to arrive.  Now most of the unpacking is done and the time has arrived to play with my gift.

Today I unboxed and installed the Wacom Tablet and all the included processing and editing software.  I saved Silver Efex for last because I was most excited about it and knew I wouldn't get to anything else if I did it first.  I chose a recent photo that I skipped over previously because I didn't think I would get my desired results through Lightroom 3, the processing software I currently use and really like despite the learning curve.

This side-by-side comparison may not impress depending on the monitor/screen you are viewing it on, but on my lovely monitor it is splendid.  I am not able to define every change, mostly because I was just playing around.  I wanted to keep the contrast but in a softer manner, bring out the detail in the writing, and lighten some shadows but retain the black background.  I'm not sure if the final image is print-worthy but it is certainly share-worthy, especially in comparison to the untouched original on the left.

After that experiment I really wanted to play so I went back to photos from my sisters' visit to Texas in March to look for a portrait possibility.  This is where I hit a roadblock.  While we were prepping my desktop computer for shipping priority number one was backing up.  Since my husband built the computer I wanted him to work with it and I generally I trust his tech skills over mine.

My computer has two internal hard drives (238GB and 931GB) and one external (big, but it's not plugged in right now for a size reading).  My workflow and storage system has been acceptable but I've never been extremely satisfied and hence change it around every couple years.  I must find a smart, solid, and consistent method though because apparently mine isn't quite there yet.  Without going into detail (maybe a future post?) my main storage folder was moved from the C drive to the D drive during the back-up process which disconnected all my photo files from Lightroom.  In simple terms, the software could not find my photos because they moved without a forwarding address.  And instead of filling out one change of address form I had to tell Lightroom where each and every folder was.  Once I figured out how to fix it (ugh!) it was simple to make the connections.  I'm happy my photo club is discussing workflow at the next meeting because I need some improvement.

Once I could access my older folders through Lightroom again I just quickly chose one to experiment with. 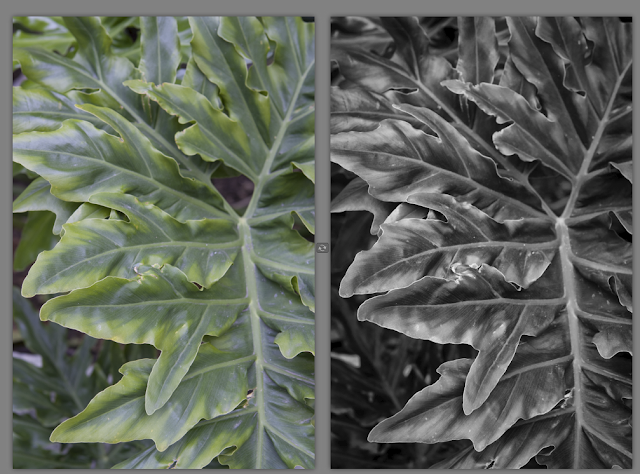 This isn't a portrait, obviously, but it's a photo from January I thought had great potential but couldn't bring out through Lightroom alone so I dropped it.  I wanted to enhance both the smooth, waxiness of the leaves and their gorgeous, contrast gradation.  With Silver Efex Pro I was able to do that.  The incredible amount of control you have over every detail is exhilarating.  The depth of tools available allow so much room for variations that if there is any slight change you want there is an option to adjust it.  If it wasn't midnight already I would work on another example to share.  Maybe once I work on a portrait I'll save some settings as an example.

I only played with the Wacom Tablet for a small time, not enough to form an opinion, but this software excited me enough to stay up late and share.

*Post Edit*
Viewing this on my laptop screen is completely underwhelming so I understand if you look at the photos with question and doubt.  Come on over to my place, I'll show you what I mean.
Posted by m. at 12:09 AM