The Sauce is the Star.

I love the adventure of shopping at local Japanese grocery stores and the resulting creativity it sparks for cooking.  After each successful trip I kick myself for not taking photos and documenting it, promising I’ll do it next time.  But when I walk into a store there is always so much visual stimulation with new and interesting items that require focus and time for investigation, as well as so many people!

No matter which store I go to, neighborhood or city, or what time of day I go there is always a stream of shoppers wandering through the narrow aisles.  I always feel large and intruding and in the way even though I never use a cart, always opting to carry a basket.  I always look carefully at where I’m walking, allowing others to go ahead of head me, communicating with head nods (like a tiny bow, the Japanese equivalent of a wave), lots of friendly smiles, and the occasional “sumimasen” (excuse me) or “gomenna sai” (I’m sorry).

Usually I stick to the outer edge of the grocery store which, like US stores, begins with produce and generally follows into seafood, meats, prepared foods, and other fresh items.  Not only is this path the healthiest but it also contains more easily identifiable foods.  Once you get into the middle aisles the guessing game’s challenge increases dramatically.

The prices here are higher and the portions are smaller, I've mentioned this before, and it’s something I have become mostly accustomed with.  I still get confused in the produce section because most items are priced per piece instead of by weight; I keep forgetting to research the kanji for this in order to read the signs better.  So I simply look for low prices and really delicious and/or interesting items, only sometimes working from a loosely formed list.  Sometimes.

Today I wanted fish and produce.  It had been about two weeks since I went to a Japanese grocery store because I ran out of grocery money before the end of the month.  These two food categories are underwhelming at the commissary and I always try to buy them locally, the quality and prices are much better on the local economy.  I came back with two kinds of fish, two kinds of shrimp, various produce and a small, round loaf of what seems to be a chewy, very good, country bread.

I had no plans for dinner, no list, and no idea what some of my purchases were exactly so I turned to the internet.  One package of fish I bought, containing two small fillets was Yellowtail/Japanese amberjack/Hamachi.  I did not take a photo but it looked just like this.  I also bought three different types of mushrooms because the prices were good, Maitake, Shiitake, and Shimeji.  The Savory Japan website is fantastic for information on basic Japanese foods.

Okay, on to the real subject for this evening, the incredible dinner.

Through some searching I decided on the Sesame Crusted Yellowtail because I had every ingredient on hand.  Once I began gathering them together though I realized that one of the small fillets would never be enough for the husband, so I also used one of the small packages of shrimp which was an extra 20% off (for being close-dated I assume).

I pretty much followed the recipe exactly so I won’t cut and paste it here, just follow the link.  The only changes I made were to include the shrimp, which I prepared just as the fish, and I added a diced Roma tomato that was a moment away from going bad.  Following a reviewer’s suggestion I doubled the sauce, thank goodness, because it was incredible!

My creative moment of the evening was with the ginger.  Fresh ginger is not always available here or I’m just going to the wrong places on the wrong days.  Fortunately I infuse my own ginger vodka.  How does that help?  Well, alcohol acts a preservative so I save the slices of ginger after I've poured the vodka out and save them for cooking.  They are already peeled and much easier to cut once the alcohol has softened the fibrous root.  I am heavy-handed with this preserved ginger as I am not sure how much flavor leaches out while infusing so I used closer to 4 tablespoons or a quarter cup of it minced, and the taste was uncompromised.  Yum yum.

In summation, the fish was delicious, the shrimp was delicious, and the sauce was delectable.  I made wide noodles for the husband and I had mine over baby spinach, as usual.  I really wish I had better photos but when you make it and love it you’ll understand why it disappears before even thinking about a real photo. 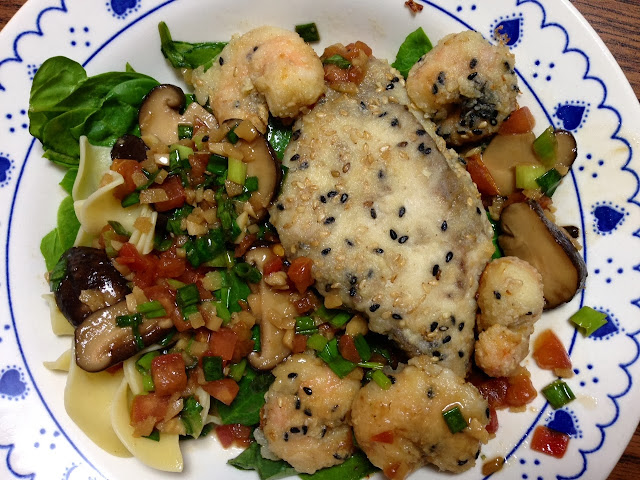 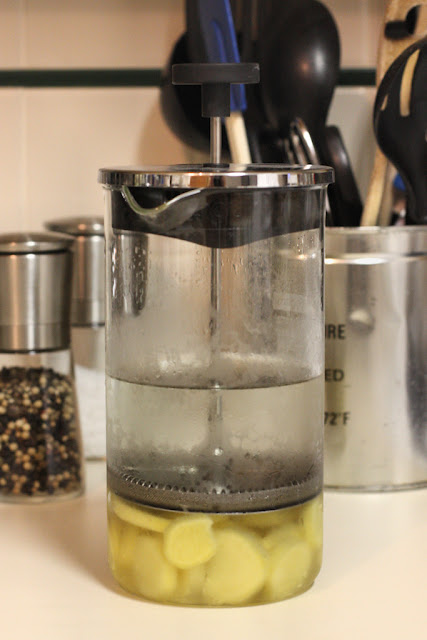 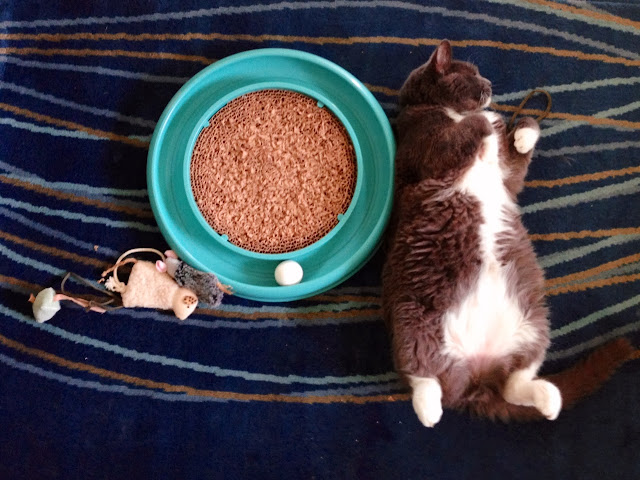 While I researched the kitty napped.

(These photos were taken with an iPhone and are by no means intended to be "real" photos, just snapshots of where I was and what I saw.)