During a recent grocery store visit I was wandering the produce section, iPod in hand with ListOmni neatly organizing my list, looking for fresh ginger.  Confused, I stood where I swore it should be but in its place, under its missing sign, were stacks of rectangular plastic packs of fresh black eyed peas.  Having never seen fresh beans like that before I took it as a sign and placed one in my cart.

Today, with time on my hands and a slightly past “use by” date I knew I had to get creative.  I already planned the evening’s main course as Ginger Salmon and knew the leftover roasted garlic mashed potatoes would not pair well.  Most starches I see as “filler” and try to avoid them for myself but I also understand that my spouse’s job is physically demanding and the carbohydrates are necessary.  Therefore, replacing starchy side dishes with vegetables is a difficult endeavor in this household but I continue to try with insignificant success.

Tonight, however, I succeeded!

It began when I realized I had no idea how I would use the beans, so I read the bottom of the package and loosely followed the instructions.  I dumped the 12 ounces of beans into my small slow cooker with 4 cups of water, a small chopped onion and some salt & pepper at a low heat.  In hindsight, I should probably have used 2 hours high and two hours low.  Nonetheless, the beans were cooking and I had time to think.

In my produce drawer was a bag a sweet mini peppers which I found at an unusually low price, purchased to eat with hummus – a combo I love.  I dug through and pulled out all the round-bodied ones suitable for cutting in half length-wise, forming perfect little buckets for stuffing with… something.

A quick Google search for Asian stuffed peppers resulted in pretty basic rice-mixture stuffed peppers, not my interest.  But in skimming the recipes I did learn that the peppers needed to be par-boiled and the time and temp they should cook when filled.  So I took the cut peppers and added them to the already hot water in the slow cooker for a few minutes until they were less crisp yet still firm.

After I prepared the salmon marinade and bagged the fillets to soak it up it was time to experiment.  In my glass measuring cup I stirred together some hoisin sauce, reduced sodium soy sauce and Tabasco soy sauce (most excellent when you can find it!)  Disappointed that I didn't have fresh ingredients, I used dried ground ginger and a touch of dried cilantro.

When I tested the beans from the slow cooker they were not as tender as I hoped, so I heated a small fry pan with a touch of grapeseed oil and sautéed a few scoops of the bean/onion mixture for about 5 minutes.   I then added a pressed garlic clove and a splash of sesame oil after removing the pan from the burner (garlic and sesame oil burn easily and lose their fresh qualities).

I combined the bean mixture and the soy sauce mixture into my little food processor, adding some rice vinegar to reach the right consistency.  The results looked surprisingly like taco meat with a hearty texture I credit to the somewhat under-cooked beans; If I used canned beans it would certainly turn mushy.   At this time I also added another crushed garlic clove that I left out earlier, next time I will just add two at the same time with the sesame oil.  This is a great example of why I love the loose art of cooking – experimenting a little bit at a time, making it up as you go. 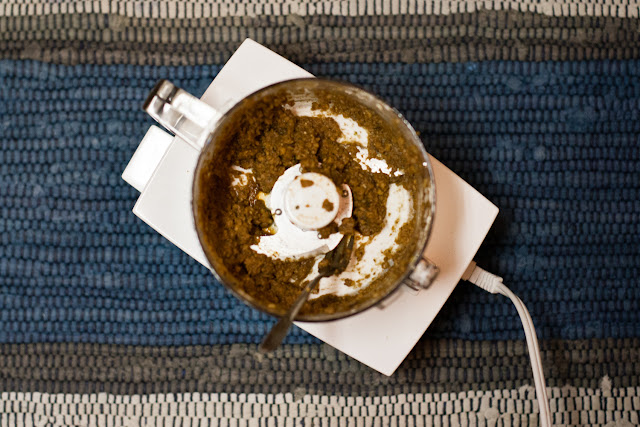 Now it was time to stuff the peppers and put them in the pre-heated toaster oven at 400 for 15 minutes.  When I took them out, I switched the oven to broil, added the salmon and taste-tested the peppers.  Yum!  The spiciness was perfect – just when I thought they may have been too spicy, the flavor and soft heat came through without burning my taste buds off.  It took me to the edge to enjoy the view without pushing me over to endure the pain.  To my relief, my husband felt the same.

The following recipe is an estimation and altered a bit for simplicity.  Obviously, if you've read this far you know what I actually did and where artistic license was practiced. 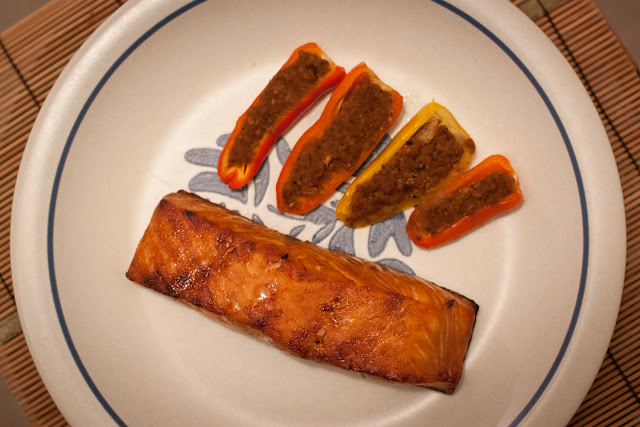 In fry pan with oil over medium heat, gently sauté beans and onion until warmed through.  Remove from heat and stir in sesame oil and garlic until combined.

Email ThisBlogThis!Share to TwitterShare to FacebookShare to Pinterest
Labels: food